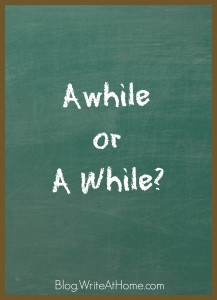 If you’re like me, you probably think twice before writing awhile or a while. Which is correct?

A. It took me awhile to free the babysitter from the duct tape.

B. It took me a while to free the babysitter from the duct tape.

The answer is B. But do you know why?

Awhile is an adverb meaning “for a time.” While, on the other hand, is a noun meaning “a period of time.” It usually appears with the article a.

If your sentence requires an adverb, use awhile. An easy way to check is to substitute another adverb like badly, quickly, or patiently. If the result makes sense, you need awhile.

Let’s wait awhile before we eat the pancakes.

I haven’t seen this movie in a while.

“I haven’t seen this movie in quickly” doesn’t work, so you need a while.

Maybe you’ve noticed that the presence of a preceding preposition makes a difference. That’s true. If a while/awhile follows a preposition like for or in, you’ll need the noun to serve as the object of the preposition: for a while, in a while.

But there are other times the noun is needed even without a preposition, such as in the sample sentence at the beginning of this post. You can successfully substitute “a period of time” but not “for a time.”

Summary: The difference between awhile and a while is a matter of parts of speech. If you need a noun, use the two words, a while. If you need an adverb, use awhile.