Bearing shame and scoffing rude
In my place, condemned He stood
Sealed my pardon with His blood
Hallelujah, what a Savior!

I’ve always found this stanza particularly moving from a theological point of view and interesting in a poetic sense. It is an example of a triple slant rhyme, also known as half rhyme, near rhyme, or imperfect rhyme. Rude doesn’t quite 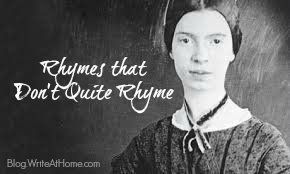 rhyme with stood and neither rhymes precisely with blood. But all three are just close enough that few ever notice. Only eagle-eye (or bat-ear?) language geeks like me.

Stood and blood are also examples of what is sometimes called sight rhyme or eye rhyme, where the words are spelled so nearly the same that they rhyme visually, so to speak.

It’s possible that the pronunciations of these words were more similar at the time the hymn was written — I didn’t look it up. Old poetry is full of examples of this phenomenon sometimes called historical rhyme. It’s likely that love and prove were once pronounced as rhymes, since they appear often in rhyming couplets in the 17th century. I’m not sure, however, if love rhymed with prove or prove with love.

Poets and songwriters today commonly employ slant rhymes. Few of us notice (though you might start noticing now).

Emily Dickinson was famous for her half-rhymes, and almost certainly used them purposely in place of exact rhymes. Perhaps she found them too tidy for poetry about a world that she found just a bit off kilter:

Hope is the Thing with Feathers
That perches in the soul,
And sings the tune without the words,
And never stops at all.

Trust me, Emily wasn’t bad at rhyming. She’s just messing with us.

Psst! Hey you! Got a comment you can spare? Leave it below.

Question from a Reader: Is “However” a Filler Word?
Write Concisely