Search
Home / Blog / What Does It Mean To Be “Hoist with One’s Own Petard”? 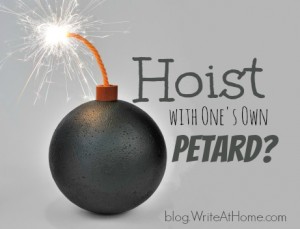 I read this sentence recently in an editorial on Obamacare: “…Obama then finds himself hoist by his own petard.”

So, what’s a petard and what does it mean to be hoisted by it?

A petard is a bomb used to blow blow up gates and doors, or to open breaches in walls. Petards were used as far back as the 1500s in attacks on fortifications. The usually contained gunpowder and were lit by slow fuses.

We still use the word hoist — it means to lift or raise. We might hoist sails or flags. Construction cranes hoist beams and girders, etc. The past participle of hoist these days is hoisted. The form’s a little different in this expression because it comes from Shakespeare, but the meaning’s the same.

To be literally “hoist by one’s own petard” means to get blown up (lifted off the ground) by one’s own bomb. Of course, the expression is usually used figuratively to mean “harmed in one’s efforts to harm another.”

So, for example, a congressman who goes to jail for breaking a law he voted for himself might be hoist by his own petard. So might an employee who protests a company policy so vigorously that it goes out of business — leaving him unemployed.

The expression seems more prevalent in the U.K., which isn’t surprising considering its Shakespearean origin. It appeared in Hamlet, when the prince discovers that his spurious friends, Rosencrantz and Guildenstern, are carrying orders for his execution and he surreptitiously replaces them with letters calling for their own deaths. Hamlet says,

There’s letters seal’d: and my two schoolfellows,
Whom I will trust as I will adders fang’d,
They bear the mandate; they must sweep my way
And marshal me to knavery. Let it work;
For ’tis the sport to have the enginer
Hoist with his own petar’; and ‘t shall go hard
But I will delve one yard below their mines
And blow them at the moon: O, ’tis most sweet,
When in one line two crafts directly meet.

One interesting, though somewhat disturbing, historical example of being hoist with one’s own petard is that of James Douglas, 4th Earl of Morton. In the 16th century, Morton designed and introduced to Scotland a type of guillotine that came to be known as the Scottish Maiden. It was put to use by Mary, Queen of Scots and was responsible for about 150 deaths, including, of course, James Douglas, Earl of Morton.

Please add your comments in the Reply area below.