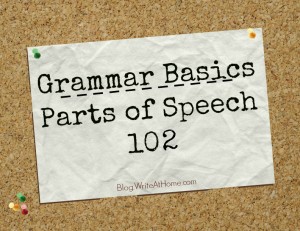 In my last post, I explained that basic English grammar isn’t as hard to learn as many assume. The key is not getting lost in the details. There are four main areas to remember:

That’s it. At least, that’s enough to give you a broad understanding of how language works. These concepts overlap, however, as illustrated by this Venn diagram: 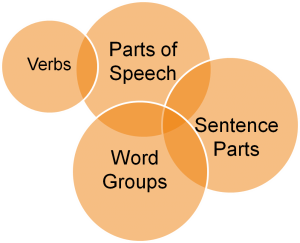 The first thing to learn are the eight parts of speech. We covered the first three in the last post: nouns, pronouns, and verbs. Let’s do the next two: adjectives and adverbs.

We keep adjectives and adverbs together because they are similar. Both adjectives and adverbs are modifiers. That means when you add them to a sentence, they modify (change, alter, specify, describe) other words or word groups. Thinking of them that way might help you remember. ADverbs and ADjectives modify words when they get ADDED.

Some people like to use the word describe instead of modify. That’s fine. Usually that’s exactly what adjectives and adverbs do. The adjective tall in The tall man ran fast describes the man. The adverb fast describes how the man ran. Sometimes modifiers don’t exactly describe, however. The adverb not, for example, changes a verb from positive to negative. It modifies the word, but it doesn’t describe it. That’s why I like modify better than describe as the word to explain what adjectives and adverbs do. But if describe works better for you, go with it.

The difference between adjectives and adverbs isn’t what they do; both modify words. The difference is in what kinds of words they modify.

Adjectives modify nouns and pronouns. We’ve already learned about those. These are the naming words and the words that take the place of naming words. So if a word modifies or describes a noun or pronoun, it’s an adjective.

Adjectives answer questions like What kind? Which? or How many?

Often an adjective is placed just before the word it  modifies, like in the examples below. Other times, it comes after, connected to it by another word or group of words:

The important thing is to use your brain. Figure out what the word is doing and what word it’s modifying. Who’s friendly? He is. And he is a pronoun, so friendly is an adjective. What’s entertaining? The circus. And circus is a noun, so entertaining is an adjective. See how it works?

Adverbs work just like adjectives, but instead of modifying nouns and pronouns, they modify verbs (adVERBS — get it?), adjectives, and other adverbs.

Adverbs answer different questions than adjectives because you don’t ask How many or What kind about verbs and adjectives (What kind of run? How many red?). Adverb questions are How? When? or Where?

Before we finish up this lesson, I need to talk about a special group of words we call articles. Articles are considered a kind of adjective, but you might overlook them if you didn’t know. The good news is that there are only three articles in English. No more no less. They are:

Articles don’t modify nouns quite the way other adjectives do. They sort of introduce them: a man, the fish, an apple. We don’t need to talk any more about articles; just remember that they are adjectives.

Now that you’ve learned about modifiers, here are a few more quizzes to test your understanding. They are a tiny bit trickier than the quizzes in the last lesson, but you shouldn’t have much trouble.

Leave your comments, questions, and suggestions below!