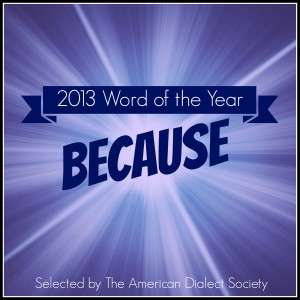 Every year since 1990, the American Dialect Society has selected an official Word of the Year. It is not necessarily a newly coined word, but a word that comes into prominence in some way. At their annual meeting, held the first week of January, they selected because as the 2013 WOTY.

If that strikes you as a odd pick, you wouldn’t be alone, but here’s the explanation by Ben Zimmer, chair of he ADS’s New Words Committee:

This past year, the very old word because exploded with new grammatical possibilities in informal online use,” Zimmer said. “No longer does because have to be followed by of or a full clause. Now one often sees tersely worded rationales like ‘because science’ or ‘because reasons.’ You might not go to a party ‘because tired.’ As one supporter put it, because should be Word of the Year ‘because useful!’

I have seen this new usage quite a bit on various blogs and always assumed it was used with a dose of sarcasm. A climate change skeptic, for example, might mockingly portray the position of the ecologically concerned as “Of course I believe in climate change. Because science!”

Or a progressive might ridicule the position of gun rights advocates by summarizing their stance as “No background checks on assault weapons. Because 2nd Amendment!”

It seems to me that this use of because is intentionally derogatory or at least satirical. It implies that one’s opinions are only pseudo-rational — more knee-jerk and ideological than consciously logical.

Though language purists will likely hate this usage, I like it quite a bit. I have a feeling it won’t last long, going the way of not (WOTY, 1992). But I’ll enjoy it while it lasts.

For those interested, here are the previous WOTY winners. Last year I created a graphic including all 23 previous winners that you can download here.