Search
Home / Blog / It’s Hard To Say Goodbye (and Hard To Spell It, Too)

It’s Hard To Say Goodbye (and Hard To Spell It, Too) 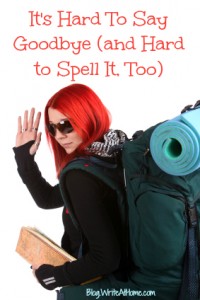 A Facebook reader asks, “Why is there goodbye, good-by and goodby? And is there a difference when using them?”

I thought it would be an easy question to answer, but, as it turns out, it’s a bit  complicated.

As far as the difference between them — other than spelling, there is none. There are four ways to spell this familiar parting expression: goodbye, good-bye, goodby, and good-by. They mean precisely the same thing.

Dictionaries and style guides disagree on the preferred spelling.

~The OED (both American and British versions) prefer the unhyphenated goodbye, and list goodby and good-by as alternate spellings. It makes no mention of the hyphenated good-bye.

~Merriam-Webster Dictionary, and The Chicago Manual of Style (which usually follows the lead of Merriam-Webster) insists on the hyphenated version, good-bye, listing goodbye and goodby as variants.

So, which one, you may ask, is right?

And I cheerfully respond: there is no “right” answer! As we talk about regularly here, English has no officially recognized authoritative body. We generally arrive at consensus about these things, but sometimes it takes a while for everyone to settle on one spelling. Sometimes we never do–gray and grey are both fine, as are theater and theatre, buses and busses, hiccup and hiccough, and so on.

There are some ways to discover which spelling is more popular though. Here’s the graph from Google’s N-gram viewer, listing the spellings found in thousands of books over the past two centuries. (Can I just say this is an awesome tool?)

According to the graph, goodbye surpassed good-bye in frequency of appearance around 1960. Prior to 1930, goodbye was in third place behind both good-bye and good-by. Goodby has always been the least favorite option.

Another way to check current usage is by doing simple Google searches.

What’s surprising is that all four still show up some, though it’s clear we are moving toward goodbye as the clear winner.

That’s not surprising, since hyphens tend to disappear over time. Today and tomorrow were once spelled to-day and to-morrow, after all.

It may interest you to know that goodbye, no matter how you spell it, originated as a contraction for God be with you, or, more precisely, God be with ye. God was expanded to good, most likely in imitation of common greetings like good morning, good day, and goodnight.

What this all means is that there are four ways to spell the English-speaking world’s most common expression of departure. Goodbye is the most common and most recommended, though good-bye is still hanging in there with a handful of dictionaries and style guides. The trend away from hyphens indicates that goodbye will eventually win out entirely. Good-by is rare and goodby rarer still.

My conclusion: stick with goodbye.

Until next time, goodbye!

Before you say goodbye, please take a moment to leave your comments below.

Why Do People Say “Would Of”?
The Next Edition of Crazy English Memes