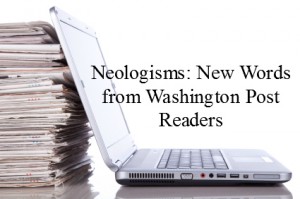 I don’t live in the Washington D.C. environs, so I have only recently discovered the Style Invitational, a weekly humor c   ontest that has been running in the Style section of the Washington Post since 1993 (with a brief hiatus in 1999). I feel like a loser to have only discovered it now, but that’s appropriate because that’s what the thousands of loyal S.I. followers call themselves: Losers. Maybe it’s not too late for me after all.

The Style Invitational solicits creatively hilarious entries from Post readers in a wide variety of weekly contests. The first contest asked for less offensive names for the Washington Redskins (an issue that is once again being debated). The winner, a Douglas. R. Miller, won with the following suggestion: “The Baltimore Redskins. No, don’t move the team, just let Baltimore deal with it.” He won a Timex watch like the one President Clinton wore at the time.

The following week’s contest was to replace the Maryland state slogan, “Manly deeds, womanly words.” (Good idea to replace that if you ask me.) That elicited entrees like “Maryland — Home to its residents.” The winner was “Maryland — Wait! We can explain!” by someone calling himself Oslo.

Contest winners these days win what is known as the Inkin’ Memorial because getting an entree published in the column is known to Losers as “getting ink.” Runners up get famously silly and useless prizes.

The contest was overseen by a writer known only as the Czar until 2003 when he was replaced by The Empress, who continues the tradition today.

Let me just say that I’ve added “get ink” to my official bucket list.

Below is a sampling of entrees from one of the S.I.’s most popular annual contests, the Neologism Contest, in which contestants are asked to create new words with various restrictions. I hope you enjoy them as much as I do.

Change a Word By One Letter

Guiltar: A musical instrument whose strings are pulled by your mother. (Frank Mullen III, Aledo, Ill., 2003)

Eruditz: A philosophy professor who can’t figure out how to work the copying machine. (John Kupiec, Fairfax, Va., 2007)

Skilljoy: The would-be friend who’s a bit better than you at everything. (Steve Fahey, Kensington, Md., 2008)

Nword: Something that gets you in really deep trouble. (Russell Beland, Springfield, 2004)

Percycution: Giving your child a name he will hate for the rest of his life. (Marty McCullen, Gettysburg, Pa., 2006)

Words containing a block of three consecutive letters of the alphabet

Move a word’s first letter to the end

Carecrows: Women who are so devoted to their men that they frighten them away. (Lawrence McGuire, Waldorf, Md., 2011)

All of these selections appear in this article published as part of the 20th anniversary of the Style Invitational.

As always, your comments are invited.