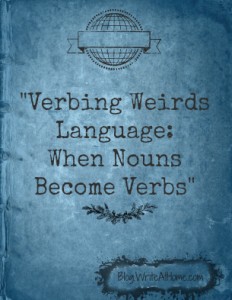 Verbification, or verbing is the common linguistic transformation of nouns into verbs. This is usually natural, fine, and practical. I find it much easier, for example,  to instruct someone to Google a word than to “look it up on a search engine.”  Google, as a verb, is more than just efficient; it’s also fun to to say (Go ahead and say it out loud; you know you want to). Oh, sure, I understand the complaint that a gargantuan private corporation unduly benefits when its brand name becomes part of everyday speech, but what can you say? Google changed the culture. They earned the right to become a verb.

And verbification can be a legitimate way for language to evolve and grow. Access, as a verb, is a useful addition to the language. And, over time, verbification has usefully transformed all the following nouns into verbs as well: mail, strike, salt, pepper, switch, sleep, ship, train, stop, drink, cup, lure, mutter, dress, divorce, fool, and merge, to name just a few. The shift from noun to verb in most of these words happened so long ago that most of us had no idea they were once strictly nouns.

My only objection comes when verbification transforms perfectly good nouns into perfectly awful and unnecessary verbs. Corporate America is the worst verbifier in this sense. Instead of providing incentives, companies have began to incentivize. Now they also talk about the dangers of disincentivizing. Yuck.

When my aircraft pulls up to the gate at airports these days I am deplaned. At restaurants, my food gets plated (I wonder why my drinks aren’t also cupped or my soup bowled). People used to engage in dialogue. Now they just dialogue. Friends no longer enjoy fellowship, they simply fellowship (this one bugs me because the suffix –ship usually denotes a noun).

It’s only preference, of course, but I don’t like being deplaned. I’d rather just exit, leave, or disembark. I think dialogue is no improvement over talk, chat, discuss, or converse. On the other hand, to plate seems like a good addition for people in the restaurant industry. It’s clean and obvious and I can’t think of simple existing synonym. Okay, they can keep that one.

Really, I’m fine with most neologisms that creatively emerge out of everyday speech. They are usually not only convenient, but pleasing to the ear — or at least inconspicuous. Google and access work for me. I like furniture verbs like chair, table, shelve, even bed. The social media world has given us tweeting, friending and trending and given new meaning to liking. I could live without friending, but I can deal with it if it stays in its social media context.

I have come to love the fluidity of our ever-changing language, but that doesn’t mean I embrace every new verbification. Creative verbs like gerrymander, greenlight, and demagogue are great, but just throwing an -ize, -ing, or -ate onto a noun form is usually ugly and unnecessary. Here are some examples of recently verbified words I find needless and discordant:

And, yes, I am aware that to verbify and to verb are themselves examples of verbification. It’s an intentional irony — get it?

You’ve got your own opinions on verbing, right? Well, go ahead and opinionize them in the reply section below!