Search
Home / Blog / Mommas and Commas: Never Use a Comma Before “Be”? 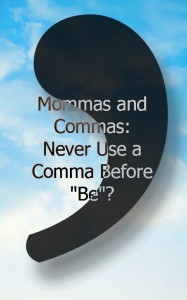 Linda M. asked the following question in a Facebook message:

I find this rule curious and wonder how such rules get created and passed on. It’s not wrong either, at least not entirely. Let’s see if we can clarify it a bit.

First, the general rule is not to use a comma to separate a verb from its subject. The concern isn’t that the comma come before the verb but that it come between the subject and its verb. In general, don’t do that.

Third, the rule has some exceptions (Ain’t that always the way?). If the sentence includes a parenthetical phrase or nonessential clause between the subject and its verb, you’ll need to set off that phrase or clause with commas.

Frank, flummoxed the family of flamingos. X  Wrong. No need for this comma between subject (Frank) and verb (flummoxed).

Frank, my favorite firefighter, flummoxed the family of flamingos. √ Correct again. This parenthetical construction is known as an appositive phrase and likewise needs to be set off with commas.

Frank, who fears feathered creatures, flummoxed the family of flamingos. √ Also correct. Here you have a nonessential clause, which needs commas.

Here’s my revision of Linda’s mom’s rule: Don’t use a comma to separate subject and verb. If a nonessential clause or parenthetical phrase comes between them, fine, you need commas to set it off as usual, but the purpose of the commas is not to separate subject from verb.

Comma comments? Come on! Leave your thoughts in the Reply section below.

10 Real Words You Will Probably Never Use
Myth Buster: Never Start a Sentence with “Hopefully”

Writing Tip #39: Learn When Not To Use Apostrophes