Search
Home / Blog / Keeping up with the Joneses

Keeping up with the Joneses 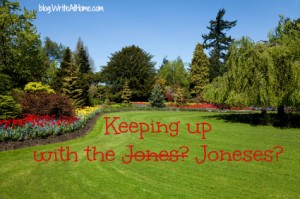 I love Facebook. If I hadn’t found a way to use it for business, I’d probably be wasting way too much time on it. But with my WriteAtHome page, I get to interact with people about some of my favorite topics: grammar, writing, language, and education.

I’ve learned recently that you can spark a lively discussion by asking tricky grammar questions. The one I threw out there yesterday, in fact, produced an unprecedented response. Well, for the WriteAtHome page, anyway.

I asked the following question:

A. the Jone’s house

B. the Jones’ house

Less than 24 hours later, I had 195 responses. Most of them were answers, but some were rather clever (e.g., The Joneses? I don’t know, I can’t keep up with them). What surprised me was the near consensus on the answer. A  majority (74%) said the right answer is B–the Jones’ house.

But the answer, according to every authority I checked, is D–the Joneses’ house. Here’s how I explained it:

First, as you know, we should all hold lightly to the concept of “correctness” when it comes to language rules like this. English has no formally recognized authoritative body to make these determinations.

Second, let me clarify that the house in question is owned by the Jones family, not by a single person named Jones. I thought adding the article “the” would have made that clear since it would be odd to refer to someone as “the Jones.”

Third, I would have assumed that B would be the most common option in actual usage. The obvious preference for it in your answers supports that assumption. And because common usage is at least one way to determine “correctness,” I wouldn’t worry too much about using that option. I doubt many readers would raise an objection. Certainly only a very few would notice or have any opinion on the matter.

But, if you consider any published style guide to be authoritative, the answer is D.

Now, it is possible to use “Jones” as an attributive adjective and say “the Jones House” without any apostrophe at all. That might be how you would refer to a historic home built by someone named Jones.

But if you know people named Jones and you are going to their house for a party, you would want to use the plural possessive. That’s what we typically mean–the house belonging to the Jones family.

So, we need the PLURAL of Jones, and the only option above that includes the plural of Jones is D. According to every style guide, you make a proper name ending in s plural by adding es: Thomases, Evanses, Williamses, and Joneses

And, to make a plural ending in s possessive, you add an apostrophe to the right of the s: Joneses’

I’ve since had a couple protests. That’s fine. I’ve talked enough here about my skepticism over the concept of correct grammar. There are plenty of folks who will write and speak they way they like regardless of rules. Others think only the masses have ultimate authority — what is correct is how people actually speak and write, and no style guide or dictionary trumps common usage.

I’m fine with either position. English is a democratic language. No one can force you to accept any rules of usage if you don’t like them.

But if you give any credence at all to the concept of grammar correctness, you have to accept my answer. I checked with the Chicago Manual of Style, the Associated Press Stylebook, the Modern Language Association Handbook, and Fowler’s Modern English Usage. They don’t all agree on everything, but they all agree that names ending in s are pluralized by adding es and that a plural noun ending in s is made possessive by adding an apostrophe to the right of the final s.

You don’t have to like it. You don’t have to use it. Really, you don’t. I don’t care at all if you prefer to visit the Jones’ house. Hardly anybody will. But if you want to disagree that “Joneses'” is correct, you’ll have to find some authority that backs you up. And, well, good luck with that.

I bet you are just itching to say something. Good news! You can do that. Use the reply section below. Let’s talk it over.