Search
Home / Blog / In Defense of the Adverb 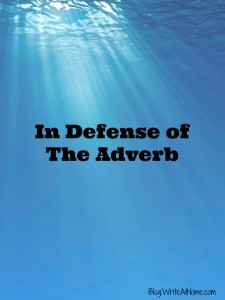 I’ve written about modifier abuse before. A common error among young writers is to heap on the adjectives and adverbs, while more experienced writers prefer to concentrate on nouns and verbs, using modifiers selectively. Mark Twain famously hyperbolized: “When you catch an adjective, kill it.”

It’s important to understand, however, that this is hyperbole. Twain didn’t really believe in avoiding all adjectives and adverbs. His books have lots of them. He just meant to be judicious in the use of modifiers.

A fan on the WriteAtHome Facebook page recently commented that “several agents and editors and even my critique group strongly discourage ANY adverbs.”

That’s writing advice going too far. In fact, it’s ludicrous. The adverb is often overused and misused for sure. As Stephen King points out, “He closed the door firmly” is no improvement over “He slammed the door.” Dressing up weak verbs with –ly words is no way to achieve dynamic, fluid prose. But adverbs are useful, sometimes essential words.

We could probably do without very. At least, we could reduce its use by 90% and the world would be a better place¹. But where would we be without not, sometimes, yesterday, and later? We need adverbs.

Some want to target just the -ly adverbs, but even those can be used effectively (see what I did there?).

What about the memorable opening line of Jane Austen’s Pride and Prejudice:

“It is a truth universally acknowledged, that a single man in possession of a good fortune, must be in want of a wife.”

Would these anti-adverbalists recommend deleting universally?

How about Fitzgerald’s iconic final sentence of The Great Gatsby?  Would “born back ceaselessly into the past” be improved by removing the word ceaselessly? Hardly.

My tendency is to be suspicious of any universal rule when it comes to writing. Great writing always seems to defy rules.

When it comes to adverbs, I suggest thinking twice and weighing whether it’s necessary or whether it improves or distracts from the sentence. Always consider choosing a livelier verb and eliminating the adverb, but if the sentence passes these little tests, leave the adverb alone.

¹Twain also had a strong opinion on very: “Substitute “damn” every time you’re inclined to write “very”; your editor will delete it and the writing will be just as it should be.”

Teaching Tip: 3 Rules for Creating Effective Writing Assignments
What’s Up with Amongst, Amidst, and Whilst?