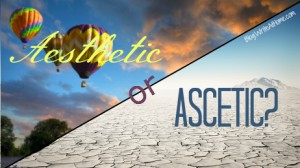 The words aesthetic and ascetic look similar and sound nearly identical, but they differ significantly in meaning.

Aesthetic, sometimes spelled æsthetic, is from a Greek word meaning “sentient” or “capable of perception.” In English usage, aesthetic means “having to do with beauty” or “having an appreciation for beauty.” It can also be used as a synonym for beautiful itself, but that’s less common. The noun form, aesthetics, is the branch of philosophy dealing with beauty, art, and taste.

The improvements to the building were only aesthetic; it was no more functional than before.

Sam had an unusual aesthetic sense about music and poetry.

Ascetic also comes from the Greek, but from a different word that means “laborious.” The noun form is asceticism, which is a religious or philosophical belief in the virtue of self-denial and self-discipline. If someone is described as ascetic, it means he or she avoids luxury and ease, preferring self-imposed hardship or rigor.

In preparing for his first marathon, Jim became ascetic in his diet and training.

The Puritans, as much as any other Christian sect, placed a high value on an ascetic lifestyle.

There’s quite a difference between these two similar-sounding words. Don’t confuse them.

I wonder if it’s possible to be both aesthetic and ascetic in one’s approach to life?

I’d sure appreciate it if you would take a moment to leave a comment below.