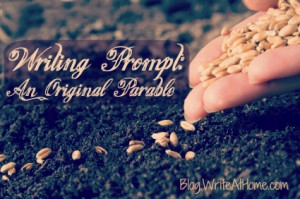 I regularly post writing prompts that have been effective in the classroom over the years. They are similar or identical to some of the writing assignments students get through WriteAtHome tutorial writing courses. Feel free to use them in your homeschool or traditional classroom. If you’d like more, go to our Free Resource Library and scroll down to Writing Prompts.

This is one of the most famous parables of Jesus, from the Gospel of Luke:

“A man was going down from Jerusalem to Jericho, when he was attacked by robbers. They stripped him of his clothes, beat him and went away, leaving him half dead. A priest happened to be going down the same road, and when he saw the man, he passed by on the other side.So too, a Levite, when he came to the place and saw him, passed by on the other side.But a Samaritan, as he traveled, came where the man was; and when he saw him, he took pity on him. He went to him and bandaged his wounds, pouring on oil and wine. Then he put the man on his own donkey, brought him to an inn and took care of him. The next day he took out two denariiand gave them to the innkeeper. ‘Look after him,’ he said, ‘and when I return, I will reimburse you for any extra expense you may have.’

“Which of these three do you think was a neighbor to the man who fell into the hands of robbers?” Jesus asked.

The expert in the law replied, “The one who had mercy on him.”

Jesus told him, “Go and do likewise.”

A parable is a story told to illustrate a moral lesson. Most of us are familiar with the parables of Jesus, the one above, but many teachers over the centuries have used this brief story form to depict important lessons.

This writing assignment is to tell an original parable that illustrates a lesson of your own.

To begin, think of an aphorism or pithy saying that you would like to illustrate. Here are some ideas to get you thinking. You are not, of course,  limited to this list:

Once you decide which saying to illustrate, start thinking of a story to tell. Unlike fables, parables usually include people, rather than talking animals, as characters. Parables use illustrations from ordinary life — things that readers would find easy to relate to. Jesus used farming, weddings, banquets and trees to connect with his listeners. You can either use the same kinds of tools or more modern situations to appeal to contemporary readers.

One rule: be sure to include dialogue in your parable. Have the characters speak.

Suggested Length: Parables are typically brief, so don’t get too wordy or too elaborate with your descriptions. The main idea is to make a concise, clear point. Keep it under two double-spaced pages

Bloggers love comments. Leave your thoughts or suggestions below.

Our 500th Post!
Proofreading Checklist for the Basic Essay