English is chock full of homophones — words that sound alike but have different spellings. Keeping them straight is important if you want to avoid spelling errors, since spellcheckers don’t catch homophones. We started the R-homophones last time and we’ll finish them here. If you want to back up and take a look at my other posts on perplexing homophones, click the links here:

Here are the rest of the Rs. There’s a quiz at the end too, so pay attention!

Rest as a noun means sleep or inactivity for refreshment and rejuvenation. It can be used as a verb as well, meaning to sleep, repose, or relax. Wrest is a very different word, meaning to twist or forcefully pull away.

While the guard took a momentary rest, Olive took the opportunity to wrest the keys from his belt.

Retch means to vomit or to make efforts to vomit. A wretch, on the other hand, is an unfortunate or despicable person.

After gulping down his first meal in days, the poor wretch began to retch violently.

To review can mean to look at again or evaluate. As a noun, a review can be a critical written article.  A revue is a type of lively dramatic entertainment involving music and dance.

The review of the new revue is not flattering.

My roomie was feeling a bit rheumy, but because our apartment is roomy, I was able to keep a healthy distance.

Someone who rigs sails is a rigger. Rigor, however, means strictness or sternness.

The captain was infamous for his rigor in dealing with riggers.

A rare quadruple homophone! Let’s take them one at a time:

New ship’s carpenters are initiated in a rite wherein each wright must write his name with their right hands.

Many inexperienced writers don’t seem realize that wring exists. Ring is more common, whether it means the sound a phone makes, a circle in general, or the common piece of jewelry for fingers and ears (and toes, noses, and bellybuttons). To wring, however, means to twist forcibly, like you might do to a wet towel.

After you wring out the wet towel, hang it from the ring on the wall.

We took the canal that paralleled the road; I rowed while Melanie rode in the bow.

A role is a part or character played by an actor. Roll has several definitions: a type of baked good (Yummy rolls!), a list or roster (The teacher took roll), a growl or reverberation (a roll of thunder), a turning motion (Stop, drop, and roll!), or to rock or sway (The ship rolled).

Mrs. Garner assigned a role to each student on the roll.

A rood is an old term for a cross or crucifix. Rude is an adjective meaning offensive; without manners. Rued is the past tense of rue, which means to regret.

Do you think the Roman soldiers rued being rude to Jesus on the rood?

Like many words in this list, root has a variety of uses. It can mean the underground part of a plant. It can be a verb meaning to dig out, eradicate, or to cheer for and vocally support. It can be an adjective too, meaning basic or fundamental. A route (sometimes pronounced to rhyme with out — see below), on the other hand, is a way of traveling.

If you take the forest route, be careful not to trip over a root in the dark.

Rote means the use of memory with little intelligence, or mechanical or unthinking routine or repetition. Wrote is the past tense of the verb write.

John wrote the state capitals he had learned by rote.

Route can be correctly pronounced root or rout, and as you can see above, becomes a homophone either way. It’s still a line or way of travel. A rout, on the other hand, is a state of wild confusion or disorderly retreat.

After the battle ended in a bloody rout, the tattered company took the long route back to camp.

Tom descended the ladder, wrung out his wet shirt, and hung it on a rung to dry.

Rye is a type of grass and the grain it produces. Wry is an adjective meaning having a bent or twisted shape. It can also mean cleverly or ironically humorous.

Todd took a bite of the rye bread and made a wry smile.

Think you’ve got them? Take the free quiz below and test your knowledge of R homophones! 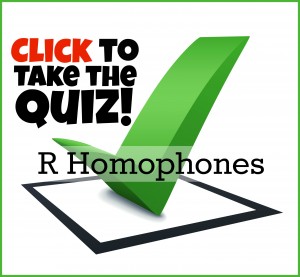 Proofreading Checklist for the Basic Essay
Heading to Alaska!