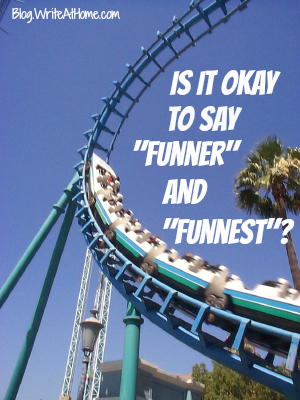 It’s tough being a grammar nerd. Because I am a reputed devotee of all things linguistic, I am held to higher standards by family and friends. I can take it, of course, because I tend to dish it out as well. I just feel sorry for my poor kids. They get it too.

Recently I received a text from a concerned friend who was driving one of my teen-aged daughters around town and overheard her utter the word funnest (Shocking, right?). He couldn’t resist the urge to immediately text me about this shameful degradation of the language by my own flesh and blood.

Question: Was my friend right in insisting that the proper comparative form should have been most fun? It’s not a simple answer, I’m afraid.

The word fun has been around for a long time, but was used exclusively, until some decades ago, as a noun — as in “We had some fun at the moving picture show,” or “This Model-T should produce some fun, eh, chum?” But since at least the 1950s, the use of fun as an attributive adjective has been quite common. Fun is now commonly used as an adjective in sentences like the following punch line:

Traditionalists still dig in their heels and reject the use of fun as an adjective. So, they would frown upon such expressions as a “fun party” or a “fun time.” But the overwhelming flood of common usage inevitably wins out over the picayune pleas of these pathetic purists. (Ooh, that was nice. Read that again.) The fact is that fun functions just fine as an adjective and most dictionaries now accept this usage as normal.

That’s how it works for other one-syllable adjectives:  tall, taller, tallest; wise, wiser, wisest, tough tougher, toughest, fat, fatter, fattest, etc. It seems logical to me, therefore, that this rule apply to fun, unless you dig in your hide-bound heels and refuse to accept  fun as an adjective.

In other words, there is no rational defense of  “more fun” or “most fun.” Any questions? My daughter was exonerated.

This, by the way, has been one of the funnest blog posts yet.

Comments are the funner than roller coasters. Leave yours below!

Interesting Word for the Weekend: Skeuomorph
“Disenfranchised” or “Disillusioned”?