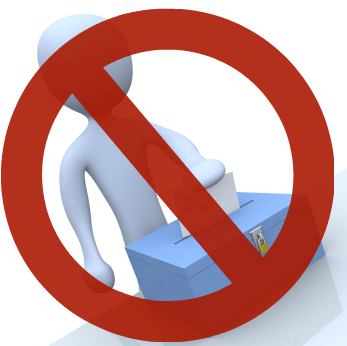 I hear the word disenfranchised fairly often. But I’m almost always suspicious that the user means something else. The context is usually how someone is “feeling disenfranchised.” And that’s quite possible.

In the literal sense disenfranchised means “deprived of a right or privilege.” Usually it’s referring to the right to vote. But it is also commonly used more broadly to refer to being “deprived of power or influence; marginalized.” And while that may be the meaning  intended in a sentence like the following from a recent blog post about Facebook, I doubt it:

As I switched from group to group, catching up on the latest news for my friends and family, I suddenly became very disenfranchised with the whole concept [of Facebook].

Disillusioned means “disappointed after having lost trust or faith in something.” Doesn’t that seem to fit better in the sentence above?

Disenfranchised and disillusioned — they are both good words, but be sure you know their definitions before using either of them.

In an interesting, related note, the word disfranchise is an exact synonym for disenfranchise. Disfranchise is older and was once greatly preferred, but those tables turned in the mid-1980s when, for no apparent reason, people began using disenfranchise more often. Today, disenfranchise is used almost twice as often in print, though both words still pop up with some regularity.

Don’t feel disenfranchised here. Your voice can be heard. Leave a reply below.

Funner and Funnest?
“Their Head” or “Their Heads”?