Homophones are words that sound alike, but are different in spelling and meaning. There are scores of them in English and the most common pose problems for spellers. Spellcheckers can’t help, of course, because a confused homophone is still a word and spellcheckers don’t understand context and can’t know whether you mean to or too, peel or peal, foul or fowl.

Because homophones are so abundant, we’ve been working our way alphabetically through the most troublesome ones. This article will cover the q‘s and half the r‘s. You can find links to all the previous homophone posts in our Resource Library.

A quart is a unit of liquid measure — one-fourth (or one quarter) of a gallon. Quarts is the plural form. Quartz is a mineral found in rocks.

I’d like to order two quarts of liquified quartz.

It might surprise you that these words all rhyme with key. Other pronunciations are considered acceptable these days, but it would be easy to confuse them. A cay (pronounced kee or kay) is a small, low island composed mostly of coral or sand. You can also spell it key, as in the Florida Keys. Interestingly, both words likely derive from the French quay (pronounced kee or kway). In English, quay usually refers to a wharf where ships are loaded. Of course, there are various common definitions for key.

The key to the pirate’s invasion of the cay is to take control of the island’s only quay.

If you are referring to the stringed piece of sports equipment, you may use either spelling. The particular sport racquetball, however, is never spelled racketball. If you mean either a loud, distressing noise or a dishonest business, you should use the spelling racket.

Few miss the spelling of the word meaning precipitation: rain. But rein and reign are often muddled. The strap used to guide horses or restrain something is a rein. When referring to a monarch’s exercise of power or period of rule, you mean reign. Careful though, sometimes rein is used metaphorically in the realm of government. A king or congress, for example, may rein in spending or an aggressive military.

Gripping sodden reins through pouring rain, the messenger raced to announce the end of the evil queen’s reign.

The verb meaning to life up or elevate is raise. Rays is the plural of ray, which can be a beam of light or energy, or a geometrical concept. Raze, interestingly, is a verb meaning nearly the opposite of raise. It means to tear down to the ground or demolish.

As the first rays of the sun come over the horizon, the foreman raises his hand to signal the bulldozer to raze the old farmhouse.

Rap has many meanings, including to hit swiftly, to utter sharply, or to criticize or blame. As a slang term, it means to hold a conversation. It is also a contemporary music style also known as hip-hop. Wrap is equally common and versatile. It can mean to cover or fold over, encase or enclose, envelop or obscure, surround or engross. As a noun, wrap can refer to a garment, blanket, or other covering.

As Tom continues to rap impatiently on the door, Sheila hurries to wrap his birthday gift.

The verb describing the action you are engaging in at this very moment is read. A reed is a type of grass with a long hollow stem or the stem itself. A reed may also refer to the strip used to produce vibration and tone in some wind instruments.

Barbara reads the book as her boat drifts among the reeds.

Real is normally an adjective meaning occurring in actuality, true and actual, or practical. it can also mean genuine, authentic, free of pretense, or serious. It has a particular meaning in physics and mathematics. Reel, on the other hand, is often a noun and refers to a device, usually cylindrical, for winding and storing flexible materials like rope or wire. It can also refer to a type of folk dance. As a verb, reel means to be thrown off balance or to feel dizzy.

Am I dreaming or is that fishing reel real?

These words are often confused because they are both verbs. Recede means to move back or away or to retreat. Reseed means to sow seed an additional time.

Once the puddles from the recent storm recede, the groundskeeper plans to reseed the football field.

Reek is a verb meaning to smoke or steam, or to give off or become permeated with an unpleasant odor. It can also be a noun meaning a strong, offensive smell. Wreak means to inflict, vent, or bring about. A common expression is to wreak havoc, though it is often misstated as wreck havoc.

After the fraternity boys wreak havoc at the party, the kitchen will reek of sweat and stale beer.

Get these all straight? Now it’s time to test your knowledge! 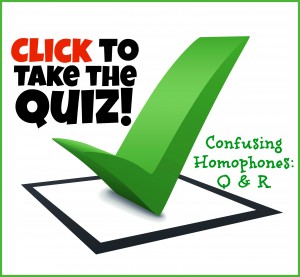 On the Superiority of Nerds
Saving the Best for Last