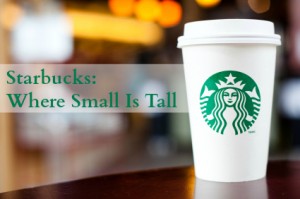 Look, I’ve got no problem with Starbucks calling their largest size cup of coffee a venti. It’s pretty clever, really, since venti is Italian for twenty — the number of ounces in the large cup. But it’s just downright marketing madness to refer to the smallest size as tall. I understand the desire to avoid terms with negative connotations, but sometimes people just want a small cup of coffee. If I want small and get offered something tall, it bugs me. Do people really feel like they get a better deal if the 12-ounce drink is called a “tall” instead of a “small”? These must be the people who think a pound of feathers is lighter than a pound of lead.

Technically, Starbucks isn’t lying. A 12-ounce coffee really is tall, compared to a thimble. Or an amoeba. Or a quark.

Starbucks coffee jerks (They prefer to be called baristas.) never correct me, of course, when I ask for a “little one.” In fact, I say “big one” instead of venti too, not because I disapprove of the name so much as because it feels pretentious to say venti. And they cheerfully just give me what I want. I don’t think I could be a regular customer if they insisted on strict adherence to Starbuckian jargon.

“Small? Do you see small on the menu? We don’t have smalls; we have talls, idiot! No coffee for you. Next!”

Dave Barry has published his opinion on this topic. His opinion is funnier than mine:

…this trend began several years ago when Starbucks decided to call its cup sizes “Tall” (meaning “not tall,” or “small”), “Grande” (meaning “medium”) and “Venti” (meaning, for all we know, “weasel snot”). Unfortunately, we consumers, like moron sheep, started actually USING these names. Why? If Starbucks decided to call its toilets “AquaSwooshies,” would we go along with THAT? Yes! Baaa!

Comments? Leave yours below.