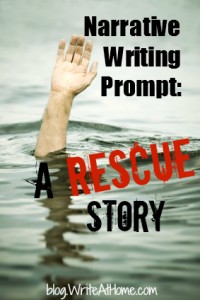 This assignment is narrative — meaning you are going to tell a story. Of course, there are many kinds of stories and deciding which kind to write might be a little overwhelming, so we have narrowed it down for you.

This story is to be a “rescue story.” It will involve at least these two characters:

Keep it brief. Sometimes it’s easy to get carried away in a story like this, so be careful not to go too long (stay under 1,000 words). Focus on the rescue, not the events leading up to it. Do your best to capture the reader’s attention and create suspense. Don’t be predictable. Try to surprise the reader.

Below are some suggestions for rescue situations. You may choose one from the list, choose one and change it up, or create one that is entirely original.