Search
Home / Blog / How to Use a Semicolon Properly

How to Use a Semicolon Properly

I’ve discussed semicolons before, and I’ve linked to helpful and entertaining explanations elsewhere, but for a variety of reasons I thought it would be worthwhile to recover the basics of the semicolon.

Few student writers know how to use semicolons. They sometimes try sticking them various places, but almost always get nothing back but red ink and suggestions like, “Just use a period here,” or, “All you need is a comma.” For many people the solution is to just avoid semicolons altogether. But semicolons aren’t that hard. Here’s a way to illustrate the role of semicolons that you might find easy to remember: 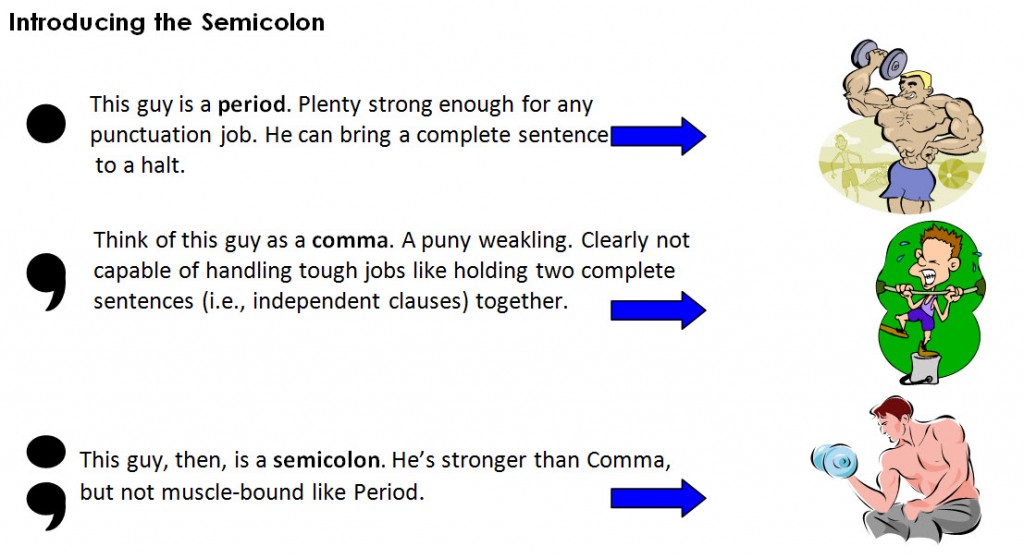 It helps to think of the period as the strongest punctuation mark because it signals a full stop at the end of a complete thought. Commas are the weakest. They just ask you meekly to pause. People push commas around. Sometimes we just ignore them, moving right along without pausing at all. I mean, what’s a scrawny little comma going to do about it anyway? Periods, on the other hand, you’d better listen to. Notice that a semicolon looks like a period sitting on top of a comma. It also functions like a cross between them. Like the period, it can signal the end of a complete thought, but like the comma, it doesn’t signal the end of a sentence.

We use semicolons mostly to indicate that even though a complete thought has ended, the sentence is still going.  A semicolon, therefore, is used to connect independent clauses that are linked so closely that they seem to belong in the same sentence:

There is a list of transition words called conjunctive adverbs that always need a semicolon when used to connect independent clauses. These are great words to become familiar with as they help show how one sentence is related to another. Here are some of the more common conjunctive adverbs (some of them are compound —made up of more than one word).

The only other use for a semicolon is to clarify a complex series. Listing word groups that already require commas can get confusing. Semicolons can come to the rescue:

If you are not presently comfortable using semicolons, just learn the two uses above — to join independent clauses and to connect parts of a complex series — and start working them into your writing.

Here’s a pinnable poster that summarizes semicolon rules. You can find others in our Free Resource Library. 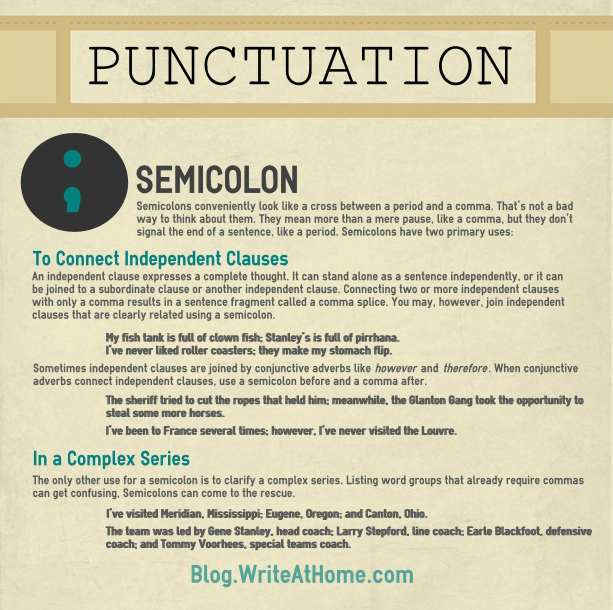 As always, I’d love to hear your thoughts. Use the Reply section below.

Twelve Ways to Say “I Love You” from Great Books
Take the Semicolon Quiz!