Search
Home / Blog / When a Preposition Is an Adverb 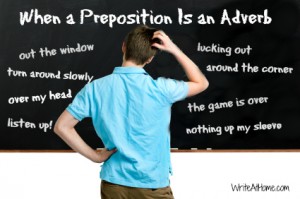 Yesterday I posted an article on the pros and cons of memorizing prepositions (I lean toward con myself). A commenter asked for clarification when I mentioned that sometimes what look like prepositions are actually adverbs. So, I thought I’d provide a refresher on what exactly a preposition is and how you can tell one from a thinly disguised adverb.

I understand confusion about prepositions. They are strange words. Useful to be sure, but hard to pin down. You can’t define them in the normal way. Try it for yourself: What’s the definition of with, of, from, on? Prepositions show relationship. They show how a noun or pronoun is related to another word or word group in a sentence. That’s an abstract explanation, I know, so let me try to show you what I mean.

Each of these simple sentences includes a preposition, which I have conveniently underlined for you. Each of them show how a noun is related to something else in the sentence. Under shows how the gum is related to the table in space. The relationship indicated is spatial. Most prepositions are like this — showing location in space.

In the second sentence, before shows when the project is due in relation to Tuesday. The relationship here is chronological — time-oriented.

The last one is the trickiest. Fortunately, the vast majority of prepositions are like the first two — showing spatial or chronological relationship. Of is the oddball, but it is a very common word. In fact of is second only to the in the list of most used words in English! Of is always a preposition and shows a sort of basic relationship that isn’t necessarily related to time or space. If something is of something, it is simply related to it in some way that makes sense to the reader.

Now that you’ve got prepositions down, I can explain how it’s easy to confuse them with adverbs. Many words can serve in either of these roles in a sentence. Here’s the easy way to tell which is which:

If it has an object, it’s a preposition, if it doesn’t, it’s an adverb.

Simple as that¹. If you are one of those people who have memorized the prepositions and you spot one in a sentence, before you mark it down as a preposition, make sure it has an object (ask preposition what?). For example:

Both sentences include the word up. We know up is often a preposition, but let’s check. Does it have an object? In the first sentence it does: stairs. Up what? Up the stairs.

H0w about the second sentence? Up what? Well, um, hmm. There’s no answer because there’s no object. Up in this example is being used as an adverb to modify the verb looked. It shows how or where Billy looked.

Think you’ve got it? Click the link below and take the quiz I’ve created to see if you can tell when a common preposition is being used as an adverb. It’s free! 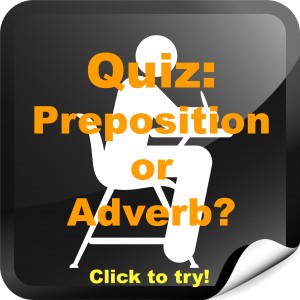 ¹Okay, it’s not really as simple as that. There’s also something called a phrasal verb that includes what appears to be a preposition that is actually part of the verb–not an adverb, but part of the verb itself.  For more about phrasal verbs, go here.