Search
Home / Blog / The Pros and Cons of Memorizing Prepositions

The Pros and Cons of Memorizing Prepositions 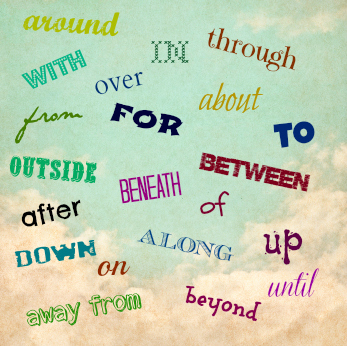 Prepositions are one of eight parts of speech and one of the most difficult to define. They are mostly little words that show relationship in time or space. That’s not an easy concept to grasp, especially for younger students. And since there is a limited number of prepositions in English, it’s common for teachers and homeschooling parents to require their students to  memorize them.

There are several tricks to help memorizing them, including a variety of songs. I’ve found preposition songs to the tune of “Yankee Doodle Dandy,” “The Battle Hymn of the Republic,” and “If You’re Happy and You Know It.” Other teachers have created their own little ditties or simply have students memorize the list alphabetically. Some have even choreographed hand and body movements. There are at least 150 words that can be used as prepositions. No matter what method you choose, that’s a lot of words to memorize. Is it worth the effort?

Personally, I think the time could be better spent, but in the interest of objectivity, here’s a list of pros and cons about preposition memorization:

1Learning the parts of speech is an important starting point for understanding grammar. Memorizing prepositions ensures that students thoroughly know at least one of the eight parts of speech.

4My kids like to memorize and the songs are fun.

1Grammar is (relatively) important. The point of learning grammar, however, is to understand how language works — how words and word groups operate together to create meaning. Memorizing a list doesn’t help students understand how prepositions work.

2The job of a preposition isn’t that hard to explain, even to young students. Visual aids like the mouse and his hole or the bird and the cloud can make the concept easier to grasp. If you teach prepositional phrases, including the idea that prepositions always have objects, kids start to recognize them easily.

3The complete list of prepositions IS long, and teaching only a partial list leaves students at a disadvantage when they encounter prepositions that aren’t included. Teaching them to recognize prepositions by function rather than by memorization avoids this problem.

4Many prepositions can also function as adverbs. Students who memorize the list of prepositions usually assume that up, for example, is a preposition, even in a sentence like “He looked up just in time.”

5Some kids dislike memorizing (not many, from my experience, but some), and even though there are many exceptions, the songs don’t typically remain in long-term memory. I can still reel off all the prepositions that start with a from the list I had to memorize more than 30 years ago, but the rest have faded away.

My conclusion? I don’t recommend it. There’s not much harm in memorizing the prepositions, but I have found it causes confusion when it comes to prepositions not on the list and adverbs that look like prepositions.

Your comments, questions, and suggestions are always welcome!