Search
Home / Blog / Parallel Comparisons: When You Need “Other” or “Else”

Parallel Comparisons: When You Need “Other” or “Else” 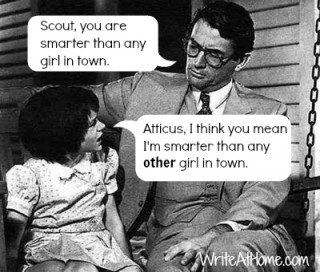 Non-parallel: I don’t like Christmas fruitcake as much as Andy.

Parallel: I don’t like Christmas fruitcake as much as Andy does.

That little addition of does makes a difference. Without it, the sentence is ambiguous. Instead of comparing how much the speaker and Andy enjoy fruitcake, it can seem to compare the speaker’s love of fruitcake to his love for Andy himself — as if someone asked which he likes better: Christmas fruitcake or Andy.

In this case, does is a shorthand substitute for likes Christmas fruitcakes. And it makes the comparison clear.

When You Need Other or Else

When the person or object you are comparing is part of a group, you need to include the word other to prevent another kind of confusion.

Confusing: Roger is a better tuba player than any boy in his class.

Improved: Roger is a better tuba player than any other boy in his class.

The problem is subtle, which is why the mistake is made so often. Without the word other clarifying that Roger is included in the group boys in his class, it would seem that Roger is in fact a girl. And Roger is an unusual name for a girl.

I’ll give a few more examples in case this isn’t clear yet.

Sarah is more shy than any student in class.

This sounds like Sarah is being compared to students in the class, but she isn’t a student herself. If she is a student, it should go like this:

Sarah is more shy than any other student in class.

Else does a similar job. It’s used with pronouns like anyone, somebody, or no one.

Pablo is faster than anyone in town.

This sentence is fine, as long as Pablo doesn’t live in town. If he does, it should say,

Pablo is faster than anyone else in town.

I know how little things like this make people a bit crazy, but that’s just the way it is with English. Little words like other or else can make a big difference in what your sentence actually says.

Admit it, I explain this better than any other blogger.