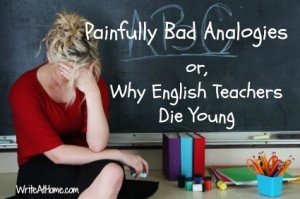 Maybe you’ve seen this list. It often goes by the title “Why English Teachers Die Young.” It’s been passed around by email for years now. They are hysterically bad. But would you find them less humorous if you knew they weren’t really submitted by high school students?

According to snopes.com, this list and others like it are actually taken from contests held by The Washington Post in which they asked contestants to come up with “lame” and “painfully bad” metaphors and analogies. It’s in a section they call the Style Invitational. The list below is a selection from entries. Most likely none of them are by high school students, much less submitted as a part of an actual class assignment.

It doesn’t matter to me. I think they are funny even if they are written by people trying to be funny. It takes talent to write this badly. Enjoy!