Search
Home / Blog / One Space or Two After a Period?

One Space or Two After a Period? 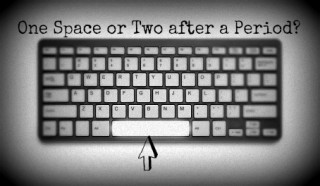 My recent post on the importance of spacing raised this question from a blog reader:

When my dad and I work on various writing projects together, we always end up hotly debating the question of spacing after punctuation. I say that there should be a single space after both a period and a comma, and he says that there should be two spaces after a period, and one after a comma.
Which is correct?

I went to high school in the pre-personal computer days of the early 80s. That means I learned to type on a typewriter. And my typing teacher instructed us to hit the space bar twice after commas and after colons. I never asked why, I just did it. And decades later, the habit was still firmly ingrained.

Some years ago, however, I learned that the old two-spaces-after-a-period rule had gone by the wayside.

To explain why, you have to understand why we ever started the double-space habit in the first place. Typewriter fonts were always what is called monospaced. In other words, every key was designed to take up the same width. Whether you typed an i or a w, it was the same width. Without extra space after a period, the letters looked too pressed-together. The extra space created a clearer separation between sentences.

But modern computer fonts are proportionally spaced. M’s and W’s are clearly wider than I’s. And the programs automatically widen the space after a period. It’s subtle but noticeable if you look carefully.

That doesn’t mean it’s wrong to space twice after a period. It just means there is no rule insisting on it. I think the extra space is unnecessary and a little silly-looking, but that’s a matter of taste.

A Space Makes All the Difference