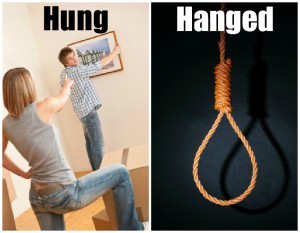 Here’s  a grammar issue that people get hung up on. When using the verb hang in the past tense, is it correct to say hung or hanged?

Hang around for the answer.

In every usage but one, the correct past tense for hang is hung.

The single exception is when you are referring to someone who was executed by hanging. In that case alone it is correct to say hanged.

In both cases the past participle is the same. In other words, you use the same form when using the helping verb have.

I’ve heard this rule stated “things are hung, people are hanged.” But that’s not necessarily true. It’s correct to say, for example that Jesus was hung on a cross, not hanged. Hanged is only the correct verb when speaking of execution with a rope around the neck. Even though crucifixion is also a form of execution, it is not strictly hanging.

I’ve heard two different explanations for this difference. One is simply that Anglo-Saxon words (like hang) typically changed form in the past (like hung) but customs inherited from the French would append an -ed to form the past tense. Many words transformed over time to this -ed past form as speakers assumed a universal rule. Some words were just stopped mid-change — like hang. And for some unknown reason, the grammar authorities (Who are these people?) decided that hanged only applies when referring to death by hanging.

Grammar Girl suggests that the two past tenses derived from two different Old English words for hang: hon and hangen.

Who knows? What I do know is that most dictionaries agree that hanged is preferred in just this special situation.