Search
Home / Blog / When to Capitalize 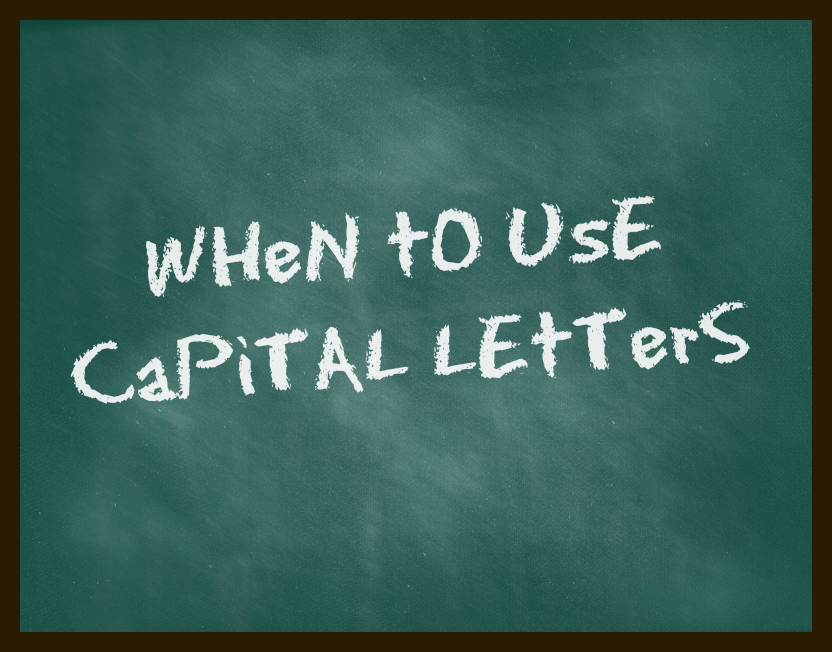 One of our writing coaches asked for a blog article on capitalization, and I am happy to oblige. I’ve tried to keep this short and sweet, for easy reference:

1. The first word of a sentence

I wish I could see what I look like in that outfit I bought when I went shopping in that store I like.

4. The first and all other important words in titles

5. The first letter of the first word in a direct quote

John answered, “That’s not my problem. It’s yours.”

6. Titles when occurring just prior to a name, when following a name on an address or signature line, and when used as a direct address

Titles after names used descriptively are not capitalized.

7. The names of the God of the Bible, other deities, and religious figures

8. The names of countries, nationalities, and specific languages

Do not capitalize family relationships when used generally.

Do not capitalize compass directions when used as adjectives or adverbs.

11. Days of the week, months of the year, and holidays.

Do not capitalize the seasons.

Exception: Capitalize seasons when part of a title, like a course title or session.

Do not capitalize centuries or decades generally.

13. Abbreviations and acronyms of specific names.

An eponym is a word derived from a person’s name, a particular place, or people group. Most eponyms are capitalized, but some are so common they lose the association with the person or place they were named after and they become regular lowercase words. Check a dictionary if you are not sure.

Basically the names of any particular groups.

17. The first word of a salutation and complimentary close

18. The titles of specific courses and language courses

Do not capitalize general course titles.

I need an English and a history credit after I get through Economics 201.

Do you have rules to add? Any questions? Please use the comment section below. I will be happy to update this list of rules!