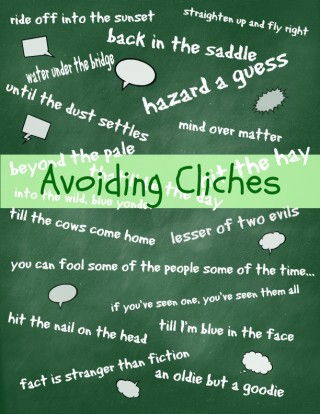 One way to keep your writing fresh and original is to avoid over-used expressions called clichés.

Keep in mind that clichés were at one time striking and clever. That’s how they became clichés — they were so memorable and vivid that others began using them in their speech and writing. But once these creative expressions become common and familiar, they lose their freshness and cease to make people pause and ponder.

Good writing should surprise us. It should make connections that we wouldn’t ordinarily make. When a writer tells us it is “raining cats and dogs” we don’t wonder about his meaning anymore. We have heard the expression so often that we pass over it without a blink. We might be more interested, however, if a writer says instead, “the clouds were wrung like enormous sponges.”

Clichés are so familiar that we hardly realize when we use them. They spill out of our mouths and onto our pages because they come comfortably prepackaged. They say what needs to be said without requiring any mental effort. In other words, they are easy, and they are comforting in their familiarity. If you want to write with vigor and originality, however, you’ve got to break the cliché habit.

Below are some clichés to avoid. This is by no means a complete list. The English language includes thousands of clichés that you should mostly avoid. As you write, pay attention to how often you are tempted to use an overly familiar expression. Resist the urge and come up with new and interesting ways of communicating your ideas.

dead as a doornail

clean as a whistle

neat as a pin

gentle as a lamb

light as a feather

happy as a clam

quiet as a mouse

crazy as a loon

strong as an ox

straight as an arrow

cool as a cucumber

pretty as a picture

high as a kite

flat as a pancake

nip it in the bud

as the crow flies

end of the road

in the nick of time

after all is said and done

foot in your mouth

beat around the bush

hang your hat on

believe it or not

grin and bear it

last but not least

so far, so good

drop in the bucket

Hanged or Hung?
Writers On the Value of Fantasy