Search
Home / Blog / There, Their, and They’re

There, Their, and They’re 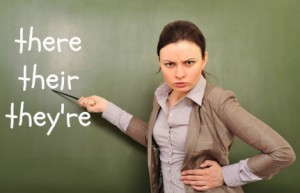 A sign I noticed in a hotel gym recently read “…all members welcome to come and show off there skills or learn some new one’s.” I suppose a review of apostrophe use should be forthcoming as well.

I don’t know any clever tricks for remembering the difference between there, their and they’re. If you know any, please share them in a comment. All I can do is explain simply their definitions.

1. They’re is a contraction. It’s a shortened version of they are. No exceptions. If you mean they are, you should use the version of they’re that contains the apostrophe.

2. Their is a possessive pronoun. When you want to show that something belongs to them, you need this version. Always. One reason this causes confusion is that we are used to an apostrophe signaling possession in nouns. If the spatula belongs to Frank, it is Frank’s spatula. But personal pronouns have their own possessive forms and never need an apostrophe (e.g., his, her, our, its, their).

The kindergartners practiced tying their shoelaces.

3. There is, well, the other one. There has several uses and is more difficult to explain. That’s why I left it for last. My suggestion is to learn the meaning of the other two and only use there when they aren’t needed. For those who must know, however, there is usually an adverb indicating location:

I put your toothbrush there on the shelf.

There can also be a pronoun use of there. At least it’s defined as a pronoun, although I have a hard time understanding in what way it substitutes for a noun. This quite common use is always coupled with a form of the verb be:

There is a penguin on your suitcase.

Dictionaries define another use of there as a noun–usually when the word is used as the object of a preposition:

You can take it from there.

But I strongly recommend that you ignore the various uses of there. Just learn how to use they’re and their. They are both simple and singular. When the situation calls for neither the contraction, they’re, nor the possessive, their, use the default, there.

And there you have it.

Challenge: Use “they’re,” “their,” and “there” in the same sentence. Extra credit if you can use them consecutively!

Categories: Grammar and Usage, Writing Coach Must Reads Tags: grammar, homophones, their, there, they're

Don’t Write Like You Talk
How to Use Dialogue Tags