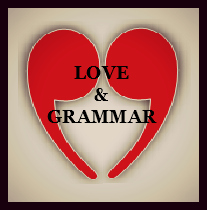 The poem below is by James Harbeck, who runs the word-blog Sesquiotica. It ‘s out of a book he wrote called Songs of Love and Grammar.

In order to understand the end of the poem, I should probably explain what he means by “negative concord.”

In English, we create confusion by the use of double negatives (or, double negation). We might hear someone say, “I don’t want no trouble,” and we know that he means “I don’t want any trouble,” but in a legal, grammatically technical sense, the sentence is the equivalent of “I do want trouble,” because the one negative cancels out the other.

In many languages, however, such a construction would be perfectly fine. These languages would view this sentence as essentially negative in meaning, so they use multiple negatives to emphasize the negativity. They call this “negative concord,” meaning the negatives are all in concord, or agreement, with the negative meaning of the sentence.

But in English, if someone tells you she “don’t want none of your money,” what does she really mean?

Don’t tell me no lies

I met a little lady from way down south
and I thought she was kinda sweet.
She had a tasty tongue in a cowgirl mouth
that said things you’d wanna repeat.

“I don’t never go for that city stuff –
I like my drinks and men smooth and hard.”
And I said, “Won’t you leave me when you’ve had enough?”
And she said, handing back my credit card,

We had a little drink and we had a little dance
and we painted lots of red on the town,
and pretty soon we had ourselves a fine romance
and I took her out shopping for a gown.

Oh, I bought her a ring, and I bought her a home,
and I got her set up nice and neat.
But sometimes I’d worry she would use me and roam,
and whenever I did, she’d repeat,

“I don’t want none of your money, sweet,
I don’t care for no one but you.

So now why am I sittin’ with my head hangin’ low
with nothin’ left, not even pride,
wonderin’ where my sweetheart and my money did go
and how I got took for a ride?

My gal was a master of verbal predation,
a lawyer who took her reward –
she tripped up my ears with double negation
that I thought was negative concord:

Grammar Rock: Verbs
The Structure of a Good Paper