Search
Home / Blog / Where Did OK Come From? 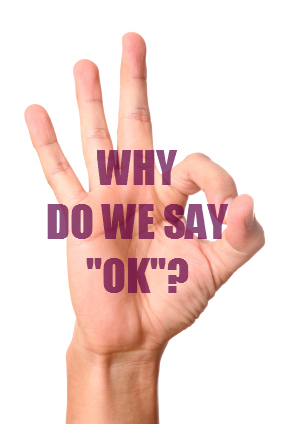 Words are fascinating, but one of the frustrations that comes with etymology — the  study of word origins — is that often there is no clear explanation. Words are coined, catch on, and mutate so elusively that even dedicated scholars can find it impossible to explain with certainty where an expression comes from.

What’s worse is that people are quick to accept and disseminate almost any interesting and plausible explanation. So rumors abound and are often passionately defended. But often these explanations are various and contradictory.

As an example, let’s take the all-too-common abbreviation O.K.  (It’s acceptable to write it OK or okay). How did it come into popular use? What does it have to do with something being acceptable or approved?

Here are some popular explanations, for which linguists find too little evidence:

Another discredited but plausible explanation is that the word came from a railway freight agent by the name of Obediah Kelly, who would write his initials on documents that had passed his inspection. That makes sense too, but there’s just not enough credible evidence to support the story.

The premier source for finding the truth on these matters is the Oxford English Dictionary, and the OED explains it this way:

In the 1830s, a brief linguistic craze was popular in the United States, primarily in New England. People would facetiously misspell and abbreviate common expressions. N.C., for example was short for ‘nuff ced (enough said), and K.Y was used for know yuse (no use). The one expression that caught on was O.K., for oll korrect (all correct).

What most likely helped O.K. survive while the other abbreviated misspellings faded away was the presidential election of 1840. Martin Van Buren, who was running for re-election, had been nicknamed Old Kinderhook after his hometown of Kinderhook, New York. His supporters formed a group they called The O.K. Club. It is assumed that this promotion helped usher O.K. into common usage. (It didn’t help Van Buren, however. He lost.)

That’s the explanation researchers find the most historic support for. Come to think of it, it’s not much different from the increasing popularity of text-born terms like LOL and OMG.

As I researched this post, I found a discussion board where someone asked about the origins of OK. Several of the common but doubtful explanations were suggested by commenters, but I found it humorous that the most popular answer to the question, “Where does O.K. come from?” was “It’s an abbreviation for okay.”

Of course, the next question would be “But where does okay come from?” Actually, the best guess is that okay was a misspelling of OK or an attempt to convert an abbreviation into standard word form. Regardless, okay seems to have derived from OK and not the other way around.

Oh, and one more thing I found: Okey-doke is slang popularized by college students and first found in print in 1932.

The Importance of Unity in Writing
Pitying the Passionate Grammar Snob