Search
Home / Blog / The Point is Moot, not Mute

The Point is Moot, not Mute 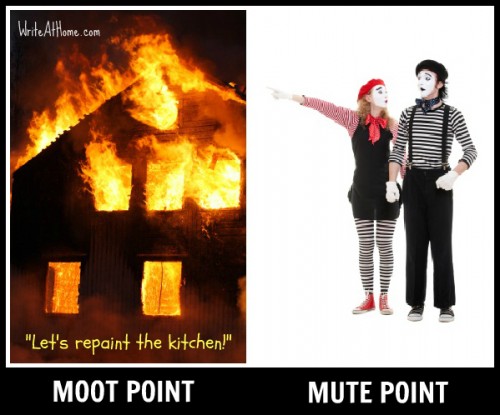 I’m here for you, folks; you know that, right? I’m not here to make you feel bad about grammar mistakes. Sometimes I tell the grammar cops to chill out. Sometimes I tell them that their pet peeve isn’t even an error. But then there are times when I have to just help out the error-makers. This is one of those times. This post is all about saving folks from embarrassment.

The expression is moot point, not mute point. Mute is pronounced with a Y sound: myoot. Moot is pronounced, well, like it looks: moot. To folks who know the difference, it sounds silly to say a point is mute.

I understand the confusion. The words look and sound similar. And moot is an archaic word few people even understand anymore. So, folks make the mistake of substituting a word that sounds familiar: mute.

But mute means silent or unable to speak. And that has nothing to do with the meaning of moot point.

So what does moot mean? In the U.S. it almost always means irrelevant, or not worth considering.

Your opinion of  the law is moot, since the Supreme Court has ruled it constitutional.

Back in 12th Century England, gatherings to discuss political matters were called moots (or meets). Maybe you noticed that the assembly of walking talking trees — called Ents — in The Lord of the Rings was called an entmoot?

Later, by about the 16th Century, students studying to be lawyers would practice their skills in mock trials. They referred to these practice trials as moot court. That’s where we get our definition today. Arguments offered in a pretend trial were moot points — they didn’t really matter.

Keep in mind, however, that another definition arose at some point and is still the primary definition in the U.K.. There, moot means still under consideration or discussion. Some in the states still hold that this is the “real” meaning of the word, but dictionaries and common usage say otherwise.

Just be aware that if you tell a native Brit that his point is moot, he will think you mean it’s undecided, not that it’s irrelevant. If you tell him it’s mute, of course, he might laugh at you.

Something on your mind? Spit it out! That’s what comments are for! Don’t be mute. Even if your point is moot.