Origins of “My Bad” 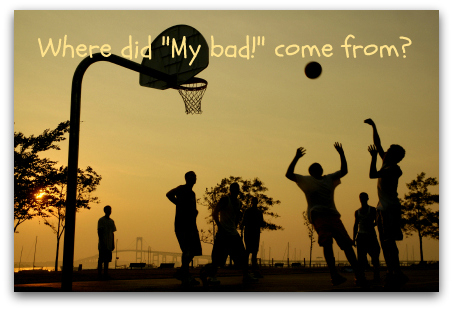 I received a comment on our Facebook page recently by a mom who is concerned about her teenagers’ use of the expression “my bad.” She asked if it was “grammatically correct.” Here’s how I answered:

Ha. No, my bad is not grammatically correct in the traditional sense. Bad is an adjective, not a noun, and it’s a grammatical oddity to follow a possessive pronoun with an adjective that modifies nothing. It’s akin to saying my happy or my sleepy.

On the other hand, it’s an idiom, which means it’s an expression that doesn’t necessarily follow the rules of grammar. It’s just “a way of saying” something. Lots of common and accepted expressions are “grammatically incorrect” in the same way.

Some brief research shows that my bad has been around since at least the 1980s. It seems to have arisen out of urban American culture. Some bloggers have attributed the expression to Manut Bol, an NBA star in the 80s who immigrated from Africa and whose native tongue was Dinka. The suggestion is that he meant “my fault“ but didn’t have a sufficient grasp of English vocabulary. His teammates teasingly picked it up and it spread from there. Most experts dismiss this as unfounded conjecture, but I thought it was an interesting story (Bol, by the way, was the tallest player in NBA history at 7’7″).

My bad been around a few decades now and seems to have caught on, particularly among the young. There’s even a book titled My Bad: 25 Years of Public Apologies and the Appalling Behavior That Inspired Them. Words and expressions change and get added to the official lexicon all the time in English. It can make us uncomfortable, but it happens in every generation. Cool once referred to nothing more than temperature, but since the 1950s, we’ve all got used to its sense of “culturally agreeable” or “generally pleasing.” Gay once meant nothing but happy.

My bad may yet fade from popular usage, but it seems to have some staying power as an informal substitute for “my fault.” Like it or not, we should probably get used to it.

Have a different perspective? A related question? Please comment below!