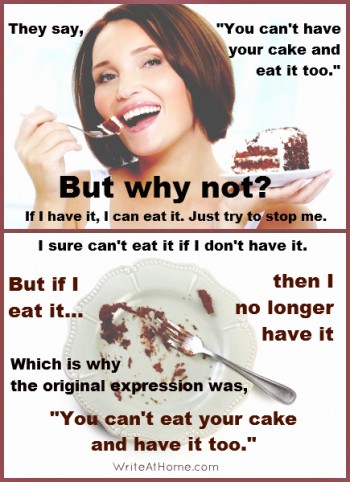 We all know what is meant when someone says, “You can’t have your cake and eat it too.” They mean you can’t have it both ways. Sometimes choices are mutually exclusive. You can’t avoid exercise and eat whatever you want and still be fit. You can’t be a devoted family man and a workaholic at the same time.

Kids pay more attention to these expressions than adults. I guess this is because they haven’t become cliche to them yet. I know when I was a kid this cake proverb made no sense to me at all. I understood the intended meaning, but I didn’t see how the words lined up.

I mean, how can you ever eat cake if you don’t have it? And once I have it, what’s to stop me from eating it? It seemed perfectly obvious that if someone had cake, that it was possible–probable even–that he would eat it.

One reason for this confusion is that “have” often means “eat” colloquially. That’s what we mean when we say, “Have some cake.” In fact, knowing this expression made me a little wary. I was tempted to refuse when someone said have some cake because maybe then I wouldn’t, for some reason, be able to eat it! It would go like this:

Hostess: Brian, have some cake!

Of course have doesn’t always mean eat. In fact, it rarely does when you aren’t talking about food.

Another reason this adage confuses people is that we tend to think about it chronologically. First you have, then you eat. The conjunction and can imply a time order: He snagged the grounder and threw it to first base. I ate the bad guacamole and ran to the bathroom.

But and need not imply a sequence of events. In the proverb we’re discussing, it means and also rather than and then.

What I’m saying is that the expression “You can’t have your cake and eat it too” is not incorrect. If I apply an incorrect meaning to the words have and and, that’s my fault. But I do prefer the original version  because it is clearer and less likely to be misunderstood.

According to Wikipedia and several other sites I checked, the earliest published version of this saying is from 1546. It was in a work by John Heywood. He said,  “Wolde you bothe eate your cake, and have your cake?” In 1611,  John Davies put it in a more familiar form: “A man cannot eat his cake and have it still.” The first published instance of the saying with the clauses reversed appeared in 1749. So, people have been messing it up for a long time! According to Ben Zimmer, it was around 1940 that instances of the have/eat version became more common than the eat/have one.

And in case you don’t think these things matter, Zimmer also notes:

Most notoriously, a young Theodore J. Kaczynski learned from his mother that “you can’t eat your cake and have it too” was the correct way to say it. When Kaczynski later penned an anarchist manifesto in the guise of the Unabomber, the appearance of that particular turn of phrase helped F.B.I. analysts, working with Kaczynski’s brother David, identify who the author was and bring him to justice for his mail-bombing spree.

I hate to admit that the Unabomber and I have anything in common, but I guess we both prefer the eat/have version to the more common have/eat. I’m just not going to be a snob about it. And I’m definitely not blowing anything up.