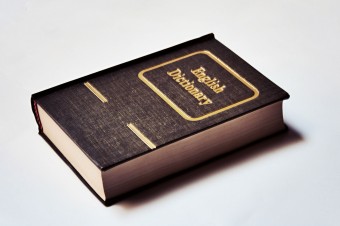 Webster’s dictionary defines trite as “hackneyed; banal; commonplace; trivial; threadbare.” And that’s an excellent word to describe the practice of starting papers with dictionary definitions. On behalf of English teachers and writing coaches everywhere, I implore you: please stop.

I understand that getting started can be one of the hardest parts of writing a paper. It’s not easy to come up with a strong opener. But resorting to the Webster defines tactic isn’t even trying.

Not long ago, I read a paper that began with the words, “Webster defines responsibility as, “a thing or person for whom one is responsible.” That’s a terribly ineffective opening sentence. What’s worse, this paper had been submitted in a college writing class and received an A! Apparently, the teacher didn’t comment on the opener.

Here are three reasons why you should never ever start a paper this way.

22% of student papers begin with a dictionary definition. Okay, I totally made that statistic up. But trust me, students do it a lot. Did I mention the word trite? commonplace? banal? threadbare? It’s a worn out idea, folks. It’s probably the leading cause of writing teacher eye-rolling and forehead-thumping injuries.

Dictionaries don’t wow people. How many folks lead off conversations with, “I was just reading the dictionary the other day when I came across this really interesting definition…” No popular people do, anyway. The example above is particularly uninteresting because it’s a really common word. Everybody knows what responsibility is. Why on earth would you even look it up? Who would submit a paper in college believing that his readers might be unfamiliar with a word like responsibility? If you must include a dictionary definition, at least make it a word that needs defining. Or maybe a word that is often misunderstood. Responsibility is neither.

Now, using a particularly clever or facetious definition might be interesting. Samuel Johnson, the author of the first English dictionary included some rather droll definitions that are good for a polite snicker:

Pension: An allowance made to any one without an equivalent. In England it is generally understood to mean pay given to a state hireling for treason to his country.

Mark Twain once defined civilization as “the limitless multiplication of unnecessary necessities.”

That’s something a writer could work with. Regular dictionary definitions, however, are unlikely to offer anything to interest the reader.

I suppose it’s possible that a dictionary definition might provide some little-noticed insight into a concept important to a paper. I can’t think of a single example, but I’ll admit it’s conceivable. No paper I’ve ever read that begins this way, however, has gained anything useful by it. The responsibility definition is particularly awful because it includes the adjective form of the same word. If there were someone so unfamiliar with everyday English to require a definition of the word responsibility, why would you assume he understands the word responsible? I’m pretty sure I remember from elementary school that it’s not a good idea to use a word to define itself.

Enough said. The next time you are struggling with how to begin a paper and find yourself drawn toward Mr. Merriam Mr. Webster, Mr. Funk, Mr. Wagnalls, or even Mr. American Heritage, stop. Control yourself. Do not go there. You can do better.

Got comments? Great! We love those. Leave them below.

100 Words to Make You Sound Smart