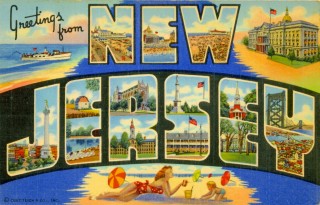 I’m in the great state of New Jersey today for the annual ENOCH convention, telling people about WriteAtHome. I was born in New Jersey and spent my early years here, so I thought I’d post something Jersey-themed.

William Carlos Williams (1883-1963)
Williams was an influential imagist poet of the early 20th Century most famous for his “The Red Wheelbarrow”:

So much depends upon
A red wheelbarrow
Glazed with rainwater
Beside the white chickens.

This one of the few poems I have laboriously committed to memory.

Janet Evanovich (born 1943)
I’ve never read any of her many books, but she has numerous best sellers, mostly her romantic adventure stories featuring bounty hunter Stephanie Plum. All of these books have clever numerical titles: One for the Money (1994), Two for the Dough (1996), Three to Get Deadly (1997) through Explosive Eighteen (2011).

Howard Fast (1914-2003)
Prolific writer most famous for historical fiction, like April Morning, about the battle of Lexington and Concord from the perspective of a teenage boy.

Mary Higgins Clark (born 1927)
Clark is a prolific and popular writer of mystery and suspense novels.

I think that I shall never see
A poem lovely as a tree.
A tree whose hungry mouth is prest
Against the earth’s sweet flowing breast;
A tree that looks at God all day,
And lifts her leafy arms to pray;
A tree that may in summer wear
A nest of robins in her hair;
Upon whose bosom snow has lain;
Who intimately lives with rain.
Poems are made by fools like me,
But only God can make a tree.

Norman Mailer (1923-2007)
A two-time pulitzer prize winner, Mailer helped forge the New Journalism movement in the 1960s and started The Village Voice in 1955. Probably his best known book is The Executioner’s Song, a fictionalized account of the life and death of murderer Gary Gilmore.

*****
Subscribers to our blog get a weekly email with links to all our recently-published articles. Click the button in the upper-right hand corner of this page to subscribe now!