Myth Buster: Never End a Sentence with a Preposition 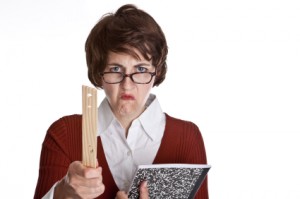 I was threatened much in my youth about ending sentences with prepositions. I was told by English teachers that such a practice was evidence not only of shameful ignorance but was definitive proof of the decline of Western civilization. So, I was supposed to replace a perfectly decent sentence like:

What are you driving at?

At what are you driving?

Because, apparently, ridiculously awkward and uncomfortable sentences are always more correct than what normal people actually say. At least that was the principle I took away. This “no concluding preposition rule” causes problems, of course. I’m not sure, for example, how to repair “Who is Myrtle going out with?” since “With whom is Myrtle going out?” still ends in a preposition (okay, technically it’s an adverbial particle, but it sure looks like a preposition to most folks).

So let’s just make this clear: “Don’t end sentences with prepositions” has always been a dubious rule, and in recent decades has been soundly refuted by everybody who writes about such things. That includes Edward D. Johnson in The Handbook of Good English, Constance Hale in Sin and Syntax: How to Craft Wickedly Effective Prose, Patricia T. O’Conner in Woe Is I: The Grammarphobe’s Guide to Better English in Plain English and the undisputed world champion Guru of Grammar, H.W. Fowler, in his Dictionary of Modern English Usage, 2nd Ed.

The rule was created centuries ago by grammarians who tied English needlessly to Latin (where it’s impossible to end sentences with prepositions). Since prepositions always have objects, they reasoned, the objects should always follow the preposition. But that too often makes for some really ugly English.

My favorite historically unverified legend about this topic involves — allegedly — Winston Churchill. While going over a proof of one of his books, he found a sentence clumsily reworked by an editor who didn’t approve of a terminating preposition. In the margin Churchill wrote,

“This is the sort of arrant nonsense up with which I will not put.”

(This quote varies some. Some version claim he wrote “bloody nonsense” or “arrant pedantry”.)

What I find most interesting is how just about everybody ignores this rule in practice, yet almost everybody can quote it. How does a dumb rule that nobody follows survive at all for so long?

An Apology to Writing Coaches
Words We Confuse that Spellcheckers Miss, Part E