But homonyms don’t cause any trouble. Since they are spelled the same, writers can’t confuse them. Homophones that aren’t spelled the same are the problems. The grammatical term I use for them is doggone homophones. They are particularly tricky because spell-checkers don’t catch them — the incorrect spelling results in a different word, and spell checkers can’t understand the context to know it’s wrong.

The only thing you can do is learn the difference between the spellings. And this isn’t easy because English is chock full of homophones. In fact, there are so many that covering them will require several blog posts. But I do not flinch at the task before me. For the record, I only plan to address the common homophones that we tend to confuse.

I’ll do this alphabetically — just the A‘s today.

Kids often include the second d when they mean a commercial advertisement, rather than the basic math process. You’d think it would be easy to remember that ad is short for advertisement.

The forty-seven televised ads added too much time to the baseball game.

There can be a subtle difference in the way you pronounce these words, but for most of us they are homophones. They may be the most troublesome of all because their meanings are closely related. They both have something to do with influence. In their most common uses, affect is a verb and effect is a noun, but they have more obscure uses where that is reversed, and that causes additional confusion.

John’s speech affected everyone, and the effect was visible.

This one produces some funny mistakes (e.g., The bride walked down the isle). The one with the a means a pathway for walking; the other is an abbreviated form of the word island.

Between the palm trees on the deserted isle was a long grassy aisle.

All ready is actually two words — an adverb (all) modifying an adjective (ready). It means really, or completely ready. The single word version, already, is an adverb meaning by now or even now.

By the time Madison was all ready for the dance, her date had already arrived.

This is similar to the previous one. All together means everyone or everything together. Altogether is an adverb meaning completely. If you can rewrite the sentence by separating all and together, you know you mean all together, not altogether: Let’s sing all together now can be rewritten Let’s all sing together now.

Bertha was altogether reluctant to participate in the play, even though we were doing it all together.

Allowed means permitted. Aloud is an adverb meaning audibly, or the opposite of silently.

In the library, we were never allowed to talk aloud.

Altar is a table or platform used in sacrifices for religious services. Alter is a verb meaning change.

A little sanding and a little paint will nicely alter the church’s dilapidated altar. 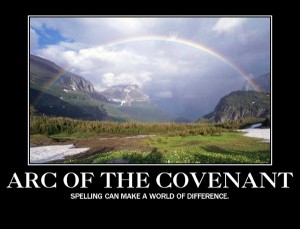 There’s a nice way to visualize the difference between these two. The arc with a c is the curved shape, like a c turned forty-five degrees. An ark is the boat Noah built or a chest like the one containing the Ten Commandment tablets.

God’s promise was symbolized by the arc of a rainbow that rose above Noah’s ark.

Ascent is a noun meaning a climb, or the act of moving upward. Assent means agreement.

With our assent, the head of our mountain climbing team thought it best to make the ascent in the morning.

Aught is an old word meaning anything. It’s opposite is naught, meaning nothing. Ought, on the other hand, is a synonym of should.

When the kindly beggar asked for food, I knew I ought to give him aught I could.

Both of these words are adjectives and have to do with sound. They are therefore easily confused. Aural has to do with hearing and oral with speaking. Aural is of the ear and oral is of the mouth. I think of the word audio to remind me of the difference, or you might think of an open mouth making an O.

Tom played music as he spoke, giving a nice aural component to his oral report.

That’s it for the A’s. Twenty-five letters to go!

Categories: Grammar and Usage, Writing Tags: ad vs. add, affect vs effect, all ready vs. already, all together vs. altogether, allowed vs. aloud, altar vs. alter, arc vs. ark, ascent vs. assent, aught vs. ought, aural vs. oral, confused words, diction, grammar, homographs, homonyms, homophones, spell checker, spelling, usage