Writing Down the Garden Path 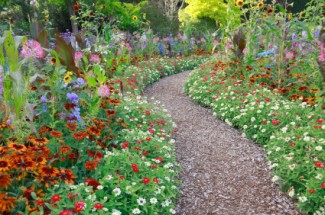 The man who hunts ducks out on weekends.

How about this one:

The cotton shirts are made of grows in Mississippi.

The answer is yes — they both make sense grammatically. Can you figure them out? In case you can’t, here are some hints. In the first one, ducks isn’t a noun; it’s a verb. It’s what the man who hunts does on weekends (he ducks out). In the other one, insert the word that between cotton and shirts. Now it works, right?

Both of these sentences are examples of what we call garden path sentences. They occur because English words and word groups are often ambiguous. That means they can be interpreted more than one way. In a garden path sentence, we readers are led down the garden path because we assume a meaning that isn’t correct, then get confused by a word that doesn’t seem to logically come next.

WARNING! GRAMMAR AHEAD. PROCEED WITH CAUTION!

The real problem in this case is that ducks is ambiguous and can be used as a noun (the bird) or as a verb (lowering your head quickly) or, in this case, as part of the phrasal verb, duck out (to sneak away).

In the second example, the problem isn’t an ambiguous word, but grammatical ambiguity. Most of us assume as we read it that cotton is being used as an adjective to modify the noun shirts (What kind of shirts? Cotton shirts). We then assume that are is the simple predicate. Using the Shurley method, we’d want to draw a vertical line after shirts. But that’s not right. In fact, the simple subject of the sentence is cotton and the simple predicate is grows. The word group shirts are made from is an adjective clause modifying cotton (What kind of cotton? The kind shirts are made from).

Earlier I mentioned that these sentences are grammatically correct. I don’t want you to misunderstand, however. Just because they are correct sentences doesn’t mean they are good sentences. For our purposes here, they are interesting and tricky, but if you are writing something you want people to understand, they are bad sentences. Writers must be aware of the potential for ambiguity and must learn to proofread for accidental garden path sentences.

Our two examples could be fixed in several ways:

Of course, there might be occasions when garden path sentences are used intentionally for comic effect:

The cleverness of this sentence is tied to the double-meanings of flies (a verb and then a noun) and like (a preposition and then a verb). . .Oh, never mind. It’s just not funny if you have to explain it.
Below are some other garden path sentences I’ve Google-gleaned via Wikipedia, Fun-with-words.com, and Grammar.about.com. Can you figure them out? It’s easier once you get used to it.
*****
Do you love to learn about grammar, writing, and words in general? You should subscribe to this blog by clicking on the SUBSCRIBE button in the upper-right-hand corner of this page. You’ll get one email per week with links to all our recent posts. Thanks for being a part of our online community!