There is a large group of people who confuse the words imply and infer. After reading this article, you will not be among them. And when you hear someone err in this matter, send them to this blog post immediately. Together, we can make the world a better place — one diction error at a time.

imply: v. to indicate or suggest

infer: v. to derive or conclude by reasoning

These words are not so much opposites as complements. They are the two sides of a single action. Think of a pitcher throwing a ball to a catcher. Implying is like pitching and inferring is like catching. 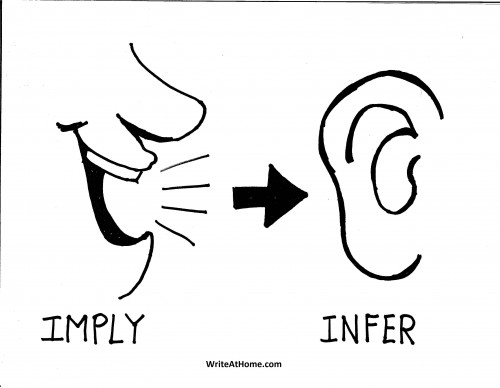 Stanley: This math problem is so easy a third-grader could do it!

Charlie: Are you saying I’m dumb?

In this dialogue, Stanley is implying; Charlie is inferring.

Now, we must be careful with these words. The pitcher-catcher analogy breaks down a little bit when you consider that while a pitcher can pitch without anyone to catch (he’d have to fetch his own ball), a catcher cannot catch what has not been thrown to him. This is not the way implication and inference works.

It’s possible for someone to make an implication without anyone noticing. The listener or reader might fail to “catch the implication” or make the correct inference. But it’s also possible for someone to make an incorrect or unfair inference. Perhaps Stanley did not intend to suggest that Charlie is dumb. If so, Stanley should be more careful with his choice of words, because, even if he implied something unintentionally, his choice of expression led Charlie to infer something negative.

So, is there an easy trick to keeping imply and infer straight?

Maybe it will help to remember that in most cases, implying must come before inferring (like pitching comes before catching), and m comes before n in the alphabet.