One of my favorite blogs is The YUNiversity. It concisely, creatively, and bizarrely addresses a plethora of grammar and linguistic matters. I share their stuff often on Twitter and our Facebook page. You should check it out.

The other day, I found the post below (The YUNiversity blogs on tumblr.com, which I don’t really get, but lends itself to graphic and photographic posts). Scesis Onomaton is a term I was unfamiliar with, but it seemed related to the redundancy idea I addressed in these  recent  posts.

Scesis Onomaton, pronounced SKEE-sis uh-NO-muh-tahn, is a rhetorical device used to emphasize a point — often facetiously — by repeating the same idea in different words. For example:

I didn’t get a single gift for my birthday. Zip. Zilch. Zero.

Of course, zip, zilch, and zero all mean same thing and only serve to exaggerate the outrage expressed in the first sentence. Here’s the graphic from The YUNiversity: 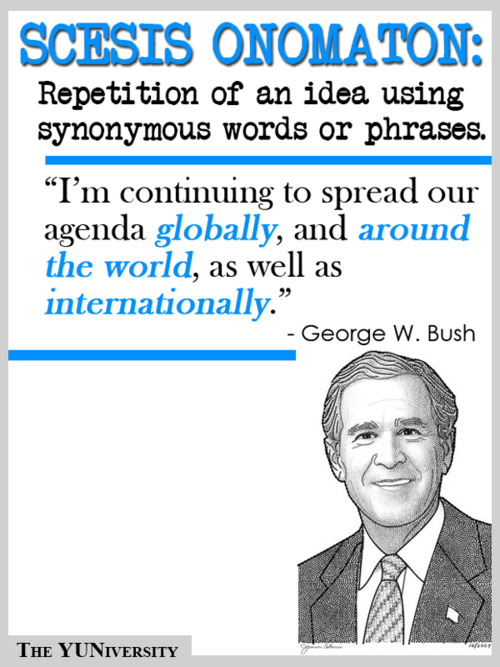 The statement by George W. Bush seemed more an example of unintended tautology to me, so I did some checking. The quote is actually from a speech/performance Bush gave at the 2006 White House Correspondents Dinner. Bush performed with impersonator Steve Bridges, and the line was intentionally self-deprecating. It wasn’t a slip so much as a spoof. You can watch the whole skit below or just skip to the 6:55 mark if you want to see the quote above.

I don’t think this qualifies as a scesis onomaton. It’s not repetition for some rhetorical purpose. It’s intentional only to make the President look silly (He sure seems to be a good sport about it, doesn’t he?). Here are some better examples of scesis onomaton:

Of course, my favorite example of scesis onomaton comes from the classic Monty Python “Dead Parrot” sketch. This sketch, according to John Cleese, was voted by British viewers the funniest of all time. You can watch the video below and judge that for yourself, but at least appreciate the clever and intentional redundancy in this line:

It’s not pining; it’s passed on! This parrot is no more! It has ceased to be! It’s expired and gone to meet its maker! This is a late parrot! It’s a stiff! Bereft of life! It rests in peace! If you hadn’t nailed it to the perch, it would be pushing up the daisies! It’s run down the curtain and joined the choir invisible! This is an EX-PARROT!

That’s all for this post. I’m done. Finished. Concluded. The end.