That, Which, or Who? 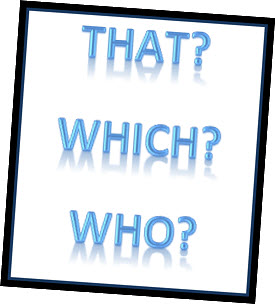 Can you tell the difference between these two sentences?

If these two seem to say the same thing, read them again. There is a slight difference in what each sentence communicates. If you can tell the difference, you will have no trouble with this lesson. If you don’t get it, read on. It should start to become clear.

The obvious visual difference is that the first sentence uses that and the second uses which (and has some commas). Many writers aren’t clear about when to use one and when to use the other.

The difference in meaning has to do with what grammarians call essential and non-essential clauses. Both sentences include a clause, a group of words that contains a subject and a verb. In the first sentence, the clause we are concerned with is that Bubba built. In the second sentence, it is which Bubba built.

The clause in the first sentence is an essential clause. This is because if you remove the clause from the sentence, you make an important change to what it is saying. The words that Bubba built clarify exactly which outhouse fell down. Without this clause, the reader might be confused about which outhouse you meant. There may be more than one outhouse.

In the second sentence, the idea that Bubba built the outhouse isn’t as important. It’s non-essential. The words which Bubba built add some interesting  but not necessary information. It’s a side-note, like saying: The outhouse fell down. By the way, Bubba built that particular outhouse. There doesn’t seem to be any other outhouse in the neighborhood, so it’s not important to distinguish it.

If you understand this difference, you will have no trouble remembering the rule: For an essential clause, use that; For a non-essential clause, set it off with commas and use which. It might help you to remember that commas always go with which and it is spelled with a c.

Like all grammar rules, there are times when writers break this one, but almost always in one direction. Which is sometimes used in essential clauses (e.g., Bennie wore the hat which I despise.), but that is almost never used in non-essential clauses. In general, it’s best to keep to the rule to avoid confusion.

Just to make sure you’ve got it, which word (that/which) belongs in the following sentences?

There is one more rule to remember here: If the adjective clause modifies a person, it’s usually best to use who instead of that or which. This is a rule commonly overlooked by young writers:

Incorrect:        The neighbor that owns the poodle was at the door.

Who can be used in both essential and non-essential clauses:

Like almost all grammar rules, there are exceptions. The principles we are providing here are an attempt to give some simple, basic guidelines about the differences between that, which, and who. Many experts, for example, consider it fine to use that rather than who when talking about people. These issues are a bit subjective and tend to change over time.

The Heroic Journey 2: The Journey
Best Footnote Ever