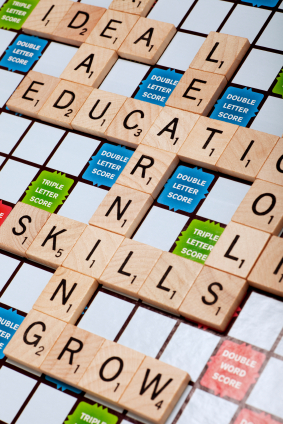 I like to play. It’s a characteristic I once expected to grow out of, but have come to accept as a genetically inescapable part of who I am. I’m a forty-five-year-old who can still waste hours engrossed in video and computer games. I smack talk and perform elaborate victory celebrations during card games. I still quietly imagine the TV announcer’s voice counting down the final seconds when I shoot baskets — alone (the crowd roars if I make it, and if I don’t, there’s always a shocking foul call that sends me to the line for the win).

I also like words. So, it’s no surprise, I guess, that I’m a big fan of word games and word play. The difference is, I don’t think word games are a complete waste of time. In fact, I think that if we can convince kids that words can be fun, it will help them in the various language arts.

And with Christmas approaching and our lives inundated with advertisements for toys and games, I thought I’d put a plug in for my favorite word-oriented board games. I may do later posts on computer games and apps that involve word play, but I especially like board games because they are social. With a good board game, it’s possible to have fun, get smarter, and build relationships all at the same time.

I have an ulterior motive here. Below are the five word-play board games I most enjoy, but I suspect there are others out there, and I want to know about them. I am hoping this post provokes some readers to share their favorites in the comments section.

1 Scrabble.  I’ll never play without thinking of my Grandma Wasko, who, at 93, still whups me. She never takes more than twenty seconds to put a word on the board, and she has committed to memory all the obscure words that seem to exist only in the Official Scrabble Dictionary.

2Boggle. Scrabble is all about creating words. Boggle is about finding them. It’s a faster-paced game too, for those who find Scrabble on the tedious side (I recommend using a timer in Scrabble to keep the game moving).

3Bananagrams. This is an ingenious and fairly recent game that involves tiles much like those in Scrabble. Players use the tiles to create ever-growing crossword-puzzles of connected words. The games are quick and you can play with almost any number of players. Just be aware that no meaningful conversation is possible during actual play.

4Mad Gab. This game is all about the sound of words. The game consists of cards with bizarre phrases like “may kick wick.” By reading the phrase aloud, it’s possible to make out the encoded expression (“Make it quick”).

5Balderdash. This one’s my favorite. Balderdash is a boxed version of a game we used to call Dictionary, in which a player finds an unfamiliar word in a dictionary, and the other players attempt to invent a believable definition. Then everyone tries to guess the right answer. Balderdash is even better because the words they provide are impossibly obscure and often hilarious.

There are always various new versions of games like these, but I’m a fan of the originals in each case. If you don’t already own them, I just gave you a great idea for a family Christmas gift!

Okay, now it’s your turn. What word-oriented board games does your family enjoy?