Search
Home / Blog / Writing and Wrestling: What is Writer’s Block?

Writing and Wrestling: What is Writer’s Block? 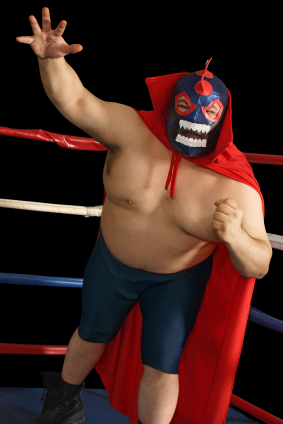 It may be tough to imagine Cervantes putting Shakespeare in a headlock or Emily Bronte dropping an elbow on Jane Austen from the top rope, but writing and wrestling have more in common than you might think. If you’ve ever struggled to turn thoughts into words, you may know what I mean.

Entering the ring of our brains are two fierce competitors: the Creator and the Censor (I imagine them in capes, tights, and knee-high boots). The Creator is the aggressive one. He’s always thinking something up. He produces a steady stream of ideas — some good, some bad — it doesn‘t matter to him as long as they keep coming. He constantly flings these ideas, one after the other, at his opponent.

The Censor, on the other hand, is highly critical. His job is to evaluate and assess. He doesn’t invent any new ideas, he just approves or rejects what the Creator hurls at him. And he is hard to please. Very little gets by the Censor. The Creator constantly tosses ideas, and the Creator deflects them to the ground, harmless and rejected.

The problem is that for writing to happen, these two need to work together.

And just as quickly, the Censor rubber stamps REJECTED on every idea that comes by:

Next thing you know, the two are tussling on the mat, and your writing goes nowhere.

Do you see why writing is hard work? It’s so difficult because it requires two different kinds of thinking that scientists believe take place in different parts of the brain. Good writers think creatively with freshness and originality. That kind of thinking takes place on the right side of your brain. At the same time, they must be precise and clear with strict adherence to rules of usage and mechanics. That’s left-brain stuff.

Writing requires the work of both the Creator and the Censor. The Creator searches the giant information warehouse in your brain and fashions an idea. Then the Censor does his job. He looks at the idea and decides whether or not it’s worth writing about. If it passes that test, he evaluates how it’s being said — applying all the rules of style, usage, and mechanics.

Remembering the writing process is important because it helps separate the two kinds of thinking we employ when we write. Pre-writing, especially techniques like freewriting and clustering, allows the Creator to have his way. We gag the Censor in these exercises and allow the Creator to dump idea after idea onto the page. Revising and proofreading, on the other hand, are the specialties of the Censor. He takes what the Creator has made and cuts, chops, slices and dices until what’s left gets his thumbs up.

There no way to keep these two from bumping into each other. The Censor is eager to evaluate every thought and word. The Creator can be a pain too — constantly tempting you down new and distracting paths as one idea inspires another. The truth is, we need both of these guys to do their job. The trick is to get them to get along with each other during the process.

So how will understanding this help you to write better? (This is a writing lesson, after all.) For one, it will help you to understand “writer’s block.” That’s the frustrating experience of not knowing where to begin a writing project or getting stuck somewhere in the middle, panicky that you’ll never get to the end. Students usually describe this experience when they say “I don’t know what to write,” or “I can’t think of anything.” But the real problem is that they can’t get any ideas past the Censor. The Creator’s had lots of suggestions, but now there’s a giant idea log-jam in the brain.

To unclog the jam, you can send the Censor to his room and let the Creator get to work in peace for a while. Scribble on some scratch paper, freewrite for a minute, or brainstorm a list of ideas — anything to get something down. Then you can let the Censor take a look at what’s there. Try to avoid doing the two kinds of thinking — creating and evaluating — at the same time. Remember the process. Create first, evaluate later.  Otherwise, you’ll end up refereeing another Creator v. Censor cage match.