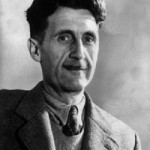 I’ve been rereading 1984 with two of my teenage daughters this summer, and due to the laws of synchronicity, I now see Orwell references everywhere. Recently, I’ve come across two articles on a now famous excerpt from his 1946 essay, “Politics and the English Language.” It’s a provocative essay, and I thought I’d share my own take.

In the novel, 1984, a key tool in the hands of Big Brother and the Party is the manipulation of language. The book’s appendix is a fascinating read for anyone concerned about the relationship between language and political power. Orwell elaborates on these themes in the essay.

“Politics and the English Language” is worth reading, even if some of his concerns are dated (bad writing today is just as bad as it was then, but in different ways). He gives examples of pompous, convoluted writing and, in the section that is most often quoted today, offers five rules to avoid mumbo-jumbo and sloppy writing.

Here are the rules and some brief commentary.

1. Never use a metaphor, simile, or other figure of speech which you are used to seeing in print.

Generally an excellent rule worth following. Of course, there are times when cliches are useful, but generally speaking, they should be avoided. They are the crutch of lazy writers. Figures of speech are intended to give the reader new and creative ways of looking at things.

2. Never us a long word where a short one will do.

It matters, of course, what is meant by “will do.” Sometimes a longer word provides color, cadence, or connotation that makes it preferable to the shorter one. There are times when a character should prevaricate rather than simply lie. Perhaps a better way of expressing this rule would be: A long word isn’t better simply because it is long.

3. If it is possible to cut a word out, always cut it out.

Hm. Not so sure of this one. I am a fan of brevity and conciseness, yes, but there are many other considerations. In fact, wouldn’t it be possible to cut out always from that sentence? I think my problem here is with the word possible. Just because a word can be eliminated does not mean it ought to be eliminated. Rhythm, style, and tone should be taken into consideration as well as literal meaning.

The basic principle, however,  is the same as in the previous rule: more is not always better.

4. Never use the passive where you can use the active.

This rule has achieved a degree of sanctity among writing instructors today. But it’s important to remember that the passive voice exists for a reason, and there are legitimate uses for it. The point is to limit the use of passive voice to where it is most effective, and those occasions are admittedly few. Active verbs tend to improve the clarity and energy of one’s writing.

5. Never use a foreign phrase, a scientific word, or a jargon word if you can think of an everyday English equivalent.

There are a handful of exceptions here. Abbreviations from Latin like etc., i.e., and e.g., for example, are common enough, as are familiar terms like pro bono, and laissez faire. Otherwise this is good advice, though a bit dated — using foreign terms to impress readers seems to be less of a problem today than it may have been in the ’40s.

Break any of these rules sooner than say anything outright barbarous.

I’m glad Orwell qualified his rules, although I think there are reasons to break them that fall short of barbarous prose.

Orwell’s rules for writing overstate and oversimplify, but as general principles, they hold up pretty well after more than half a century. Writers of all ages would be well-advised to commit them to memory and practice.

As always, your comments and questions are welcome!