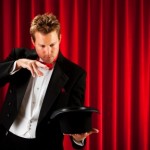 Apparently, the expression has its roots in cricket. In the mid 19th Century, a bowler who retired three consecutive batters with three deliveries (a very rare feat) would be awarded a gift in honor of the accomplishment. This was normally in the form of a hat. Then, in the early part of the 20th Century, the term was adopted by professional hockey when a team sponsor, who happened to be a milliner, offered a free hat to any player who scored three goals in a game.

As is usually the case, there is some debate about this account, but this seems the most likely explanation. It works for me anyway. Maybe I should buy Kerri a hat?

Update: As it turns out, the folks at Merriam-Webster have chosen this same term for an informative video they provide on their search pages. If you can’t hear it, uncheck mute; I think it’s automatically muted. They give the same explanation, but it’s in an engaging video format.

Why I Don’t ‘Preciate Sean Hannity